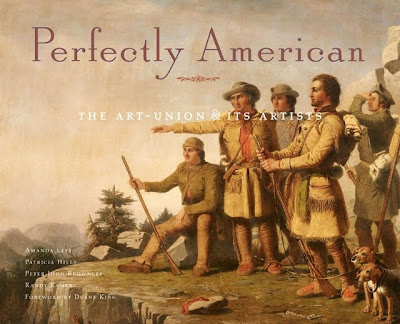 The American Art-Union, based in New York City, founded in 1844 with the goal of fostering the arts in America through education and publication, is the subject of an outstanding new book, Perfectly American: The Art-Union & Its Artists.

Modeled after European organizations, the American Art-Union sought to establish a national aesthetic in the United States and unite all regions of the country through art. A small subscription fee entitled members of the Art-Union to at least one engraving of a prominent piece per year, as well as entry in an annual lottery distributing larger works of art.

The Art-Union appealed especially to genre painters- William Sidney Mount, George Caleb Bingham, Charles Deas, William Tylee Ranney, and other noted artists submitted their works for jury and acceptance. As the United States grew increasingly divided in the 1840s, the Art-Union’s selections came under heavy scrutiny and there were accusations of supposed abolitionist and Whig sentiments. Low on funds and facing an ultimately successful lawsuit over the legality of their annual lottery, the American Art-Union disbanded in 1852.

At 200 pages, and with contributions by Patricia Hills, Peter J. Brownlee, Randy Ramer, Amanda Lett and 60 color illustrations Perfectly American provides a new look at the American Art-Union and the culture of the United States in the 1840s.