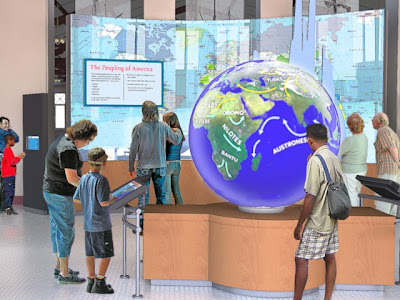 The Statue of Liberty-Ellis Island Foundation and the National Park Service have opened the first phase of the Peopling of America Center, a major expansion of the Ellis Island Immigration Museum, which will explore arrivals before the Ellis Island Era. This 10,000 square foot experience focuses on the history of immigration from the Colonial Era to the opening of Ellis Island in 1892.

Interpretative graphics and poignant audio stories tell first-hand accounts of the immigrant’s journey—from making the trip and arriving in the United States to their struggle and survival after they arrived and efforts to build communities and ultimately a nation.

“Until now, our exhibits have centered on the years when Ellis Island was open,” said Stephen A. Briganti, the Foundation’s President and CEO. “Of course the history of migration to America goes back to our nation’s beginnings right up to today, so there were many people whose stories weren’t told. The Peopling of America Center will fill an enormous gap in America’s understanding of its past, present, and future.”

Also recently unveiled was the American Flag of Faces, a large interactive video installation filled with a montage of images submitted by individuals of their families, their ancestors, or even themselves which illustrates the ever-changing American mosaic. A living exhibit, Flag of Faces accepts photo submissions and can also be viewed at www.FlagofFaces.org.

The Center’s second phase, which will open in Spring 2013, will present a series of interactive multi-media exhibits that focus on the immigration experience from the closing of Ellis Island in 1954 to the present day, including a dynamic radiant globe that illustrates migration patterns throughout human history. The Peopling of America Center was designed by ESI Design and fabricated by Hadley Exhibits, Inc.