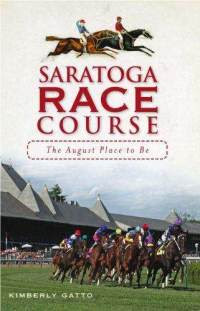 In the early 1800s, Saratoga Springs was a destination for its natural mineral waters and their healing powers. But that changed in 1863 with the opening of the Saratoga Race Course. From then on, summers in the Spa City came alive with the excitement of the “sport of kings.” Since the victory of the great horse Kentucky in the introductory Travers Stakes, the racecourse has showcased the sport’s greatest champions. Otherwise seemingly uncatchable thoroughbreds — including Man o’ War and Secretariat — faced unexpected defeat on its turf, earning Saratoga the nickname the “Graveyard of Champions.”

In Saratoga Race Course: The August Place to Be (History Press, 2011), author Kimberly Gatto chronicles the story of the oldest thoroughbred racetrack in the country, with tales of the famous people and horses that contributed to its illustrious history.

Gatto begins the book with a brief history of racing in New York beginning with the old Newmarket track at Belmont, and the Union Course, and moving toward the early expansion of racing across New York state. She offers a look at Saratoga Springs itself, and Irishman John &#8220Old Smoke&#8221 Morrissey who built the track and nearby casino which also still stands as a local historical society.

Through the rest of the book, Gatto describes many of the great horses that have competed at Saratoga, including short histories of the major stakes races. She begins with the Travers Stakes, first run in 1864 and America’s first major stakes race.

Accompanying the text are recent color and black and white archival photos and illustrations by Allison Pareis. An appendix includes every winner of the Travers, Alabama, and Whitney, with jockey, trainer, owner, and running time.