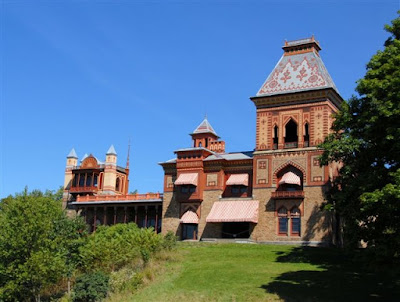 On Sunday, October 30, 2011, Olana State Historic Site ended its 43rd visitor season, and changed over to its winter schedule (Friday through Sunday). Over 132,000 guests visited Olana in the past year, one beset with an abundance of rain, gasoline prices that threatened to hit $5 during peak travel season, two hurricanes and an October nor’easter. In December of this year Olana will mark another milestone as Linda E. McLean closes her last year as director at Olana State Historic Site, ending an almost 40-year museum career with New York State.

McLean completed a master’s thesis on the photograph collection at Olana, working with then director Richard Slavin, and her abiding interest in Olana and American art developed from that point on. She joined the staff at Olana as Director of Education, stepping up to acting director when Slavin left to accept a post in Cooperstown. In 1980 McLean was offered and accepted a position of Director in her own right at the John Jay Homestead State Historic Site in Westchester County, and remained there until 2000, when she returned as Director at Olana State Historic Site, filling the position vacated by the late James Ryan.

When asked why she was retiring at this point she answered without hesitation. “We have completed all the major parts of the comprehensive plan that was adopted when I first arrived. We have restored the full exterior of the building from the brilliant stencils around the cornices to the bricks and stone of the walls- the roof will be completed this coming summer. We have opened the second floor for touring, restored wall papers, opened a very successful gallery space, restored carpets, textiles, making rooms come alive with the color and beauty that until now had only been known to Olana’s first residents. There are now six restored buildings in use on the property with plans for the restoration of the rest of the barn complex. Overall we have leveraged several millions of dollars in the restoration of the site, the WHOLE site- collections, buildings, and the landscape. And if the years and work at John Jay Homestead are included, the list gets richer, better and longer. It has been a wonderful journey and I have met and had the privilege of working with some amazing people. With the completion of the comprehensive plan, a new Commissioner in Albany and new plans for the whole system of parks and historic sites, it is time to turn the page and turn the site over to a new director, someone who can harness the technology of the 21st century to take Olana through its next round of planning and beyond.&#8221

“And,” McLean added,“it is now time for me to explore the world much as Church did as he gathered ideas for his great works. This is my time to “follow the road less traveled” and see where this next journey takes me. I have been very lucky to have been part of two spectacular historic sites and worked with the people who made them what they are. I have been most fortunate to complete my career at Olana, working to restore it to the grandeur that it knew as the home of artist Frederic Edwin Church. But more important to do this work in the community where I grew up, for the people of a community that nurtured me in my youth and gave me the foundation that allowed me to experience a 40-year career in a field I have loved from the beginning. Now it is time to move on, Church once said, about an hour south of Albany is the center of the world, and I own it, well, I can say, about an hour south of Albany is the center of the world and, for a while, I too, could call it my own.”

Linda is the fourth director for Olana State Historic Site. A successor has yet to be named. At this time all efforts in her office and at the historic site are focused on wrapping up the 2011 season and preparing for what will be a new chapter at Olana State Historic Site. “On behalf of the board and staff of The Olana Partnership, I want to thank Linda for her dedicated service to Olana,” stated Sara Griffen, president of The Olana Partnership. “She has been a true partner these last several years, a trusted colleague and supportive collaborator. We wish her all the best in her future endeavors.”