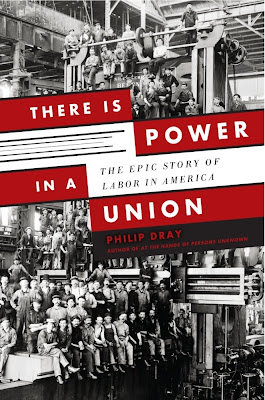 There Is Power in a Union: The Epic Story of Labor in America by Philip Dray is an epic, character-driven narrative that moves between picket lines, union halls, jails, assembly lines, corporate boardrooms, the courts, the halls of Congress, and the White House.

Dray (NPR Interview) presents an urgency of the fight for fairness and economic democracy for working people — a struggle that remains especially urgent today, when ordinary Americans are so beset by economic troubles.

From the textile mills of Lowell, Massachusetts, the first real factories in America, to the triumph of unions in the twentieth century and their waning influence today, the con­test between labor and capital for their share of American bounty has shaped our national experience. Dray’s ambition is to show us the vital accomplishments of organized labor in that time and illuminate its central role in our social, political, economic, and cultural evolution.

Philip Dray is the author of At the Hands of Persons Unknown: The Lynching of Black America, which won the Robert F. Kennedy Book Award and made him a Pulitzer Prize finalist, and Stealing God’s Thunder: Benjamin Franklin’s Lightning Rod and the Invention of America, and the coauthor of the New York Times Notable Book We Are Not Afraid: The Story of Goodman, Schwerner, and Chaney, and the Civil Rights Campaign for Mississippi. He lives in Brooklyn.