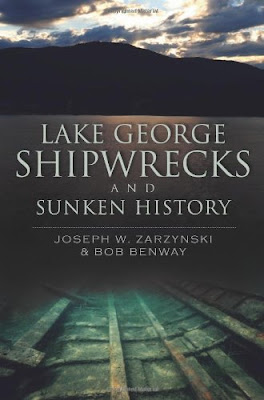 A new book, Lake George Shipwrecks and Sunken History, was published this spring by The History Press. Written by Joseph W. Zarzynski and Bob Benway, the book is a collection their columns previously published in the Lake George Mirror along with additional material. Zarzynski and Benway helped establish Bateaux Below, which works to preserve shipwreck sites in Lake George.

The depths of Lake George hold an incredible world of shipwrecks and lost history. Zarzynski and archeological diver Bob Benway present the most intriguing discoveries among more than two hundred known shipwreck sites. Entombed are remnants of Lake George’s important naval heritage, such as the 1758 Land Tortoise radeau, considered America’s oldest intact warship. Other wrecks include the steam yacht Ellide, and excursion boat Scioto, and the first Minne-Ha-Ha (including some new findings). Additional stories include an explanation behind the 1926 disappearance of two hunters, John J. Eden and L. D. Greene, of Middletown, and pieces on the lake’s logging history and marine railways.

One thought on “Lake George Shipwrecks and Sunken History”