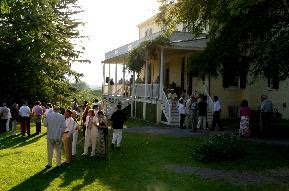 It has been ten years since the Thomas Cole National Historic Site opened its doors, and they have a great many milestones to celebrate, so they are opening their doors on Sunday, September 25, from 1-4 pm for a Community Day, featuring a new exhibition focusing on the past decade. Admission is free.

In the ten years since the 2001 opening, over 60,000 people have visited the historic site and attendance is now 400% higher than it was in the first year. Once near ruin, the house and grounds now provide an evocative environment where visitors can learn about the founder of the Hudson River School of art.