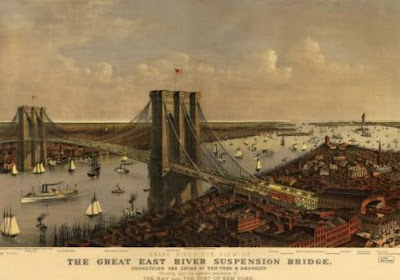 There is a new New York City addition to the Big Map Blog, a bird’s-eye view of the Brooklyn Bridge in 1885 made by noted print makers Currier & Ives. The image is freely downloadable by anyone at its highest resolution [8,999px ? 6,293px].

The Big Map Blog was begun in March and already has a considerable number of large, unusual maps. &#8220I came across many of the maps you’ll see on the Big Map Blog while doing research for a film I’m working on,&#8221 The Big Map Blog’s curator, who calls himself 59 King, reports. &#8220While searching, I found thousands of old, beautiful maps that are sadly being kept from the public that deserves them — sometimes by clumsy or unwieldy government ftp sites, and other times by archives with steep fees for research, and steeper fees for reproduction. I felt strongly that something should be done about this.&#8221

The site adds new maps five days a week. There are also several other NYC maps on the Big Map Blog, which can be found using the New York City tag.