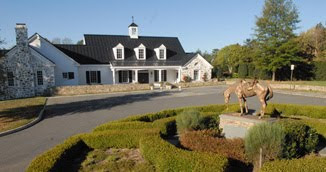 The National Sporting Library and Museum (NSLM) in Middleburg, Virginia, has announced seven John H. Daniels Fellows for 2011-2012 including one to Judith Martin Woodall, a New York City writer and former manager of Claremont Riding Academy, for
“Witching the World with Noble Horsemanship: Riding in New York City, 1770-2007.”

The fellows program began in 2007 in honor of sportsman and book collector, John H. Daniels (1921-2006), a longtime supporter of the National Sporting Library. Since 2007, the fellowship has supported thirty-eight researchers-in-residence at the NSLM from all regions of the United States and ten foreign countries.

The National Sporting Library and Museum is dedicated to preserving and sharing the
literature, art, and culture of horse and field sports. Founded in 1954, the institution has over 17,000-books dating from the 16th-21st centuries. In the fall of 2011, the newly renovated and expanded historic building on the campus will open to house exhibits of American and European fine sporting art. Information is shared through exhibitions, lectures, seminars, publications, and special events. The NSLM is open to researchers and the general public. Admission is free.