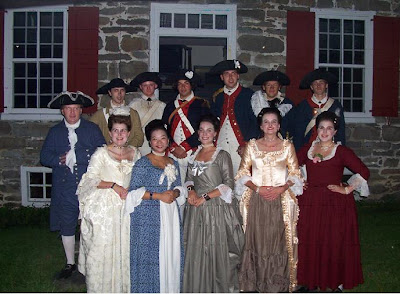 General Washington knew exactly what he was about, in the summer of 1781, by trying to convince the British and his own soldiers that he would attack New York City. Unbeknownst to all but trusted officials, he had agreed to move with the French Army south to Virginia. In Virginia, a French naval force from the Caribbean would join them to complete the encirclement of the British Army at Yorktown.

The soldiers of the 2nd and 3rd Continental Artillery Regiments, encamped at New Windsor, since the previous November, spent their time assembling and training on heavy siege artillery. Without the heavy guns to batter down the fortifications of British General Cornwallis’ Army at Yorktown, the decisive victory achieved there would not have been possible.

On July 24 from 7:00 to 9:00 PM costumed historians will think and act like they were the actual participants, at Knox’s Headquarters, in New Windsor, in July 1781, making the final arrangements for the movement of the artillery to the south. For more information please call (845) 561-1765 ext. 22. Knox’s Headquarters is at 289 Forge Hill Road, in Vails Gate, New Windsor, New York at the intersection of Route 94 and Forge Hill Road, four miles east of Stewart Airport and three miles from the intersection of I-87 and I-84.

As the evening progresses, the masking darkness gives the grounds a surreal experience, adding significantly to the authenticity of the experience. The residents will beguile visitors with tales of past glories, suffering, and share their hopes and aspirations for an uncertain future. Tour the grounds and mansion by the glow of tin lanterns and experience the tense days before Yorktown with the soldiers and civilians, who once made their homes in the area. The “residents” have no knowledge of the fact that Washington wants to take them south instead of to New York.

Visitors will meet few, if any, names that they recognize from history, but instead humble souls whose efforts combined with thousands of others, helped forge a nation. This type of presentation, called “first-person living history,” has developed into a very exciting way to make history more meaningful to visitors. This technique is used at Plimoth Plantation in Massachusetts and Colonial Williamsburg, in Virginia.