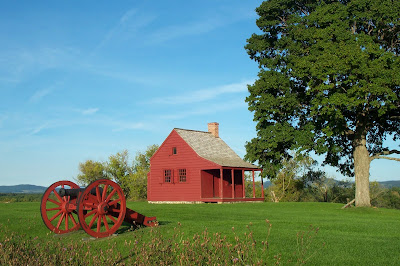 Independence Day on Monday, July 4 will be celebrated at Saratoga National Historical Park on Routes 4 and 32 in Stillwater, with a 10:00am Citizenship Ceremony and traditional readings of the Declaration of Independence with free lemonade toasts at 1 and 3pm.

At 10:00 am, on the anniversary of our nation and upon the grounds where independence was won, 20 immigrants from countries all over the world will become new citizens of the United States of America. Fife and drums, color guard, musket and cannon firings frame this special event organized by Sons of the American Revolution, Daughters of the American Revolution, Friends of Saratoga Battlefield and U.S. Citizenship and Immigration Services.

At 1 and 3 pm, as a messenger from 1776, park ranger Joe Craig reads from the Declaration of Independence with authentic 18th century toasts reflecting the insightful wit of the document signers. Enjoy free lemonade to share in the toasts, followed by celebratory musket and cannon firings.

Saratoga Monument in Victory and the General Philip Schuyler House in Schuylerville, both located 8 miles north of Saratoga Battlefield, will also be open from 9:00am to 4:45pm. The Battlefield is open daily from 9 am to 5 pm.