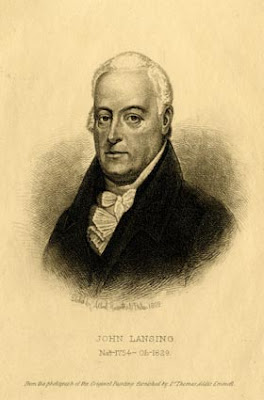 At an auction held in May at Sotheby’s the Chairman of the New-York Historical Society, Roger Hertog, purchased the Constitutional Convention notebooks of John Lansing, Jr., a New York delegate to the 1787 Philadelphia Convention. Mr. Hertog has announced that he will donate the exceptionally rare documents to the Library of the Historical Society.

The New-York Historical Society plans to digitize the Lansing papers in their original format to share with scholars everywhere. The documents will also be displayed in an exhibit when the Historical Society’s galleries re-open in November 2011.

“With this magnificent gift, Roger Hertog has secured the New-York Historical Society’s place of privilege as one of the most important repositories in the world for scholarship and teaching around constitutional history,” said Louise Mirrer, President and CEO of the Historical Society. “Together with the notes on the Convention written by South Carolinian Pierce Butler—part of the Gilder Lehrman Collection on deposit at the Historical Society—and other extraordinary original resources of both Gilder Lehrman and Historical Society collections, Lansing’s Constitutional Convention Notebooks establish our institution as a principal site for understanding that the Constitution was a product of compromise, negotiation and brilliant thinking, an accomplishment nearly without parallel in modern history.”

“If you love American history, ask yourself how often (if ever) you get the chance to see a first-hand account of one of the most important events in that history,” Roger Hertog stated. “John Lansing’s notebooks from the Constitutional Convention are a rare such account: an eye-witness report of what went into the creation of the U.S. Constitution.”

John Lansing, Jr. (1754-1829) was born in Albany, took up the legal profession and served as a New York delegate to the Constitutional Convention. His detailed notes of the Convention join those of Rufus King, which are already in the Historical Society’s collection, and enrich our knowledge of the debates and compromises that helped forge the foundational document of the United States. Lansing was also a major figure in the New York State ratification convention in 1788 in Poughkeepsie, where his insistence that the new Constitution be enlarged by a Bill of Rights helped to secure the protections that citizens enjoy today.

The delegates’ vow of secrecy, which banned the taking of notes for publication, limited the amount of material created documenting the Convention proceedings. Although notes by a number of other delegates, including James Madison, survive, Lansing’s are among the purest and most detailed, providing a unique and unedited first-hand account of the period of Lansing’s attendance at the Convention.

“Reading through the Lansing notebooks is a thrilling experience,” Jean Ashton, Executive Vice President of the New-York Historical Society and Director of the Library Division said in a prepared statement. “Lansing recorded speeches and discussions, assigning names and identifying positions, as the delegates participated in the give-and-take of debate. Lansing became distressed that the meeting was seeking to establish an entirely new government rather than simply amending the Articles of Confederation, as charged. Lansing and his fellow New Yorker Richard Yates left the Convention early, but not before he had participated actively and created this illuminating and highly significant record.”