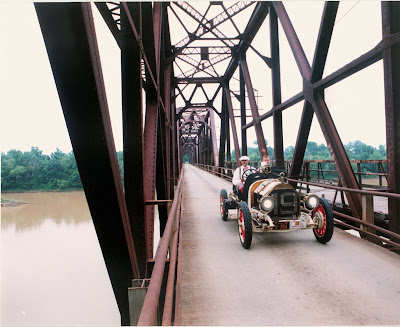 The Great Race, America’s premiere old car rally, is coming to Saratoga Springs this Thursday, June 16, and is expected to bring up to 100 antique automobiles to the city. The overnight stop will be marked by a public event at the Saratoga Automobile Museum to mark their arrival in the Spa city, one of America’s premier vacation destinations.

The 2011 event, sponsored by Hemmings Motor News and Coker Tire, starts in Chattanooga, TN and finishes in Bennington, VT. Run from coast to coast from 1983-2007, it is not a speed race, but a time/speed/distance rally. The driver and navigator are given precise instructions each day that detail every move down to the second, then scored at secret check points along the way and penalized one second for each second either early or late. As in golf, the lowest score wins.

Cars start, and hopefully finish, one minute apart if all goes according to plan. The biggest part of the challenge, other than staying on time and following the instructions, is getting an old car to the finish line each day.

The first car is expected to arrive at the Saratoga Automobile Museum, located in the scenic Saratoga Spa State Park, around 5 p.m., with cars continuing to arrive each minute for an hour and a half. The cars will remain parked for two hours to allow spectators to visit with the participants and to look at the cars.

“When the Great Race pulls into a city it becomes an instant festival,” offered Jeff Stumb, from Huntsville, Ala. He and his wife Karen have competed in the Great Race several times in his 1916 Hudson. “We have seen as many as 40,000 people at stops like Huntington Beach, Calif., and Sioux Falls, S.D.

Participating cars range in age from 1911 to 1969, with most having been manufactured before World War II. For the first time, a 100-year-old car, a 1911 Velie owned by Howard and Doug Sharp of Fairport, N.Y, will participate in the race.

The Great Race was started in 1983 by Tom McRae and was sponsored by Interstate Batteries. It takes its name from the 1965 movie, The Great Race, a comedy based on the real life 1908 automobile race from New York to Paris starring Tony Curtis, Jack Lemmon, Natalie Wood and Peter Falk.

The auto museum will not be open to the public during the event, with participants expected to move to their downtown hotel at approximately 8:30 pm.