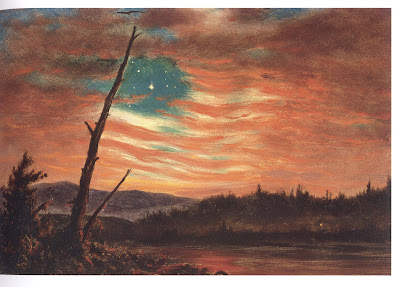 This year marks the sesquicentennial of the fall of Fort Sumter, and the start of the Civil War. Olana’s exhibition: Rally ’round the Flag: Frederic Edwin Church and the Civil War on view in the Evelyn and Maurice Sharp Gallery at Olana is one of the first exhibitions in the multi-year, regional and national commemoration of the conflict.

The exhibition opens May 26 and runs through October 30, 2011, and features Frederic Church’s most patriotic work, Our Banner in the Sky, a sensational sunrise resembling a Union flag, as well as numerous oil and pencil sketches related to the war and rarely on view. The exhibition is also the first retrospective of the very talented and little known artist John S. Jameson (1842-1864). A free public lecture by Dr. Kevin J. Avery, Frederic Church scholar and senior research fellow at The Metropolitan Museum of Art will kick-off the exhibition season on May 22, 2011 at 2 p.m. in the Wagon House Education Center at Olana.

Fort Sumter was bombarded by the newly formed Confederate States of America on April 11 and 12, 1865, launching the American Civil War. At the time, Church was preparing to debut his latest masterpiece at Goupil’s Gallery in New York City. His reaction was not to cancel the unveiling, but instead to re-title his painting of icebergs, The North, showing his support for the northern cause. Church also pledged the exhibition fees to the Union’s Patriotic Fund – a fund to aid the families of Union soldiers. Less than a month later, in a further act of nationalism Church painted a sunrise as a Union flag, Our Banner in the Sky, in response to the patriotic fever that swept the North. Church’s salute to the flag was published as a chromolithograph by Goupil & Co. and quickly became popular.

The renaming of his great picture, now known as The Icebergs, The North, and the creation of Our Banner in the Sky only represent Church’s initial reaction to the conflict. During the next five years, as the Civil War raged on, Church produced some of his most important works. And many reflected the turbulence of the war. The wonderful artistic source material for these epic paintings remains at Olana, and will be on view in the exhibition. The powerful and surging Under Niagara, 1862 (unlocated) was done from the lively oil sketch, Study for Under Niagara, 1858, in Olana’s collection. The study, which will be on display in the exhibition, represents the inspiration for the masterpiece and an important link to the lost canvas. To create his most devastating war-time vision of the exploding volcano Cotopaxi, 1862 (The Detroit Institute of Arts), Church referenced sketches from his trips to South American in 1853 and 1857.

The pencil drawings of Cotopaxi, featured in the exhibition, were done on location and illustrate Church’s amazing ability to capture the ever changing eruption. As the war turned in favor of the Union, Church returned to the subject of the frozen north, inspired in part by a sketch on display by Isaac Hayes of Church’s Peak, a mountain the explorer named to honor the artist. This watercolor, and Church’s own oil sketch Aurora Borealis (also in the exhibition) informed his large celestial tour de force Aurora Borealis, of 1865 (American Museum of Art, Smithsonian). And after the war, the end of the conflict and the return of hope are reflected by the passing storm and rainbow in Rainy Season in the Tropics, 1866 (Fine Arts Museums of San Francisco), worked out in a small compositional pencil sketch on view in the exhibition.

A number of Church’s paintings were displayed to support the Union, at Sanitary Fairs – public exhibitions held throughout the northeast to benefit wounded soldiers. The best-known was the Metropolitan Sanitary Fair which took place in New York City in spring 1864. Church’s epic canvas The Heart of the Andes was a feature of the exhibition. Church had sold the masterpiece to William Blodgett, but for himself, Church kept Study for Heart of the Andes, featured in the exhibition, as a reminder of the painting that brought him world renowned.

Church was not immune from the tragedy that the war brought to so many American citizens on both sides of the conflict. He lost a good friend and watched the careers and aspirations of others derailed by the war. Church’s friend Theodore Winthrop, after whom the artist’s named his son, was an emerging poet and travel writer and was one of the first Union casualties of the war, falling at the Battle of Big Bethel in June 1861. Arctic explorer and physician Dr. Isaac Hayes was called away from his primary passion to witness first hand the horrors of the war while commanding an army hospital. John S. Jameson was a young landscape painter described in Church’s own words as having an enormous talent and potential, whose life was tragically cut short when he died on August 31, 1864, at the age of twenty-two, only months after enlisting in the Union army.

A Hartford native, Jameson was both an exceptional artist and musician. Church recognized the extraordinary artistic potential of Jameson, commenting to the young man’s mother, “Of all the younger artists whose personal acquaintance I have made, and whose works and characteristics of mind and heart came to my observation, no one has interested me so much, as your son or held out better grounded hopes of future high excellence.”

Jameson completed very few canvases during his brief life cut short by imprisonment and death in Andersonville Prison. Olana has gathered the six identified paintings by Jameson and for the first time these works are shown together: Landscape in the Olana collection and five works from private collections.

Jameson’s poignant story represents only one of countless young men, on both sides of the battlefield, who gave their lives in the conflict. It is hoped that this initial gathering of Jameson’s works, together for the first time in any exhibition, will provide an opportunity for discovery and artistic comparison, and garner appreciation for this heretofore lesser-known gifted Hudson River School painter.

The stories of Jameson, Winthrop and Hayes serve as a personal counterpoint to the more professional and public support Church would give through his art.

To launch the exhibition, noted Church scholar Dr. Kevin J. Avery will lecture on Frederic Edwin Church and the Civil War at the Olana Wagon House Education Center on Sunday, May 22 at 2:00 p.m. The lecture is free and open to the public, but pre-registration is requested. There is a $5.00 per car fee charged to enter the site on weekends. Members of The Olana Partnership have free access to the site. Please call 518-828-1872, ext. 103 to reserve a seat.

Dr. Avery will discuss the ways in which the Civil War impacted the artist both personally and professionally. Avery will examine Church’s major works from the era of the war and the beginning of reconstruction as barometers of the failures and successes of the Union army and the hopes for the Nation. During this time, Church was at the height of his career and these paintings are his most important canvases.

Kevin J. Avery is a senior research scholar at The Metropolitan Museum of Art and an adjunct professor at Hunter College, City University of New York. A short essay by Dr. Avery will be available in a fold-out pamphlet in the exhibition gallery.

Olana is located at 5720 Route 9G in Hudson, NY 12534. The grounds are open every day from 8:00 a.m. until sunset- guided house tours (reservations recommended) are available Tuesday through Sunday and holiday Mondays, May through October, 10:00 a.m. – 5:00 p.m., and include access to the Evelyn and Maurice Sharp Gallery- the last tour starts promptly at 4:00 p.m. Telephone: (518) 828-0135 for reservations and to confirm hours.

Illustration: Frederic Church, Our Banner in the Sky, 1861. Courtesy Olana.