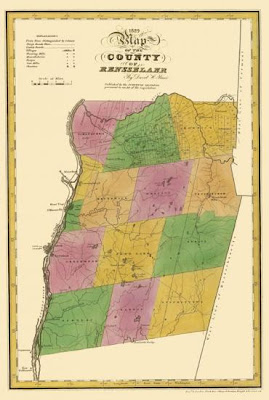 The Troy New York Daily Whig for the years 1834 to 1838 is the sixth set of newspapers recently added to the Troy Irish Genealogy Website. There are 821 reported deaths and 1,749 names on the reported marriages during this period. These records will be of great interest to genealogy researchers since the information in this data base predates the 1880 New York State law requiring the reporting of death and marriage records.

You can view these records by going to the Troy Irish Genealogy website (click on PROJECTS then THE TROY NEWSPAPER PROJECT). These records, like most of the TIGS data series, cover the general population in the area and are NOT restricted to Irish surnames.

While 492 of the marriage records showed no indication of residence, those records where the residence was reported are of interest as they show numerous cities and towns throughout New York State as well as other states and even foreign countries.

At the time of the 1840 census, Troy was the fourth wealthiest city in the USA on a per capita basis. This may account for the numerous individuals from across the United States coming to Troy to be married.

Two other transcription projects are currently being completed by the Troy Irish Genealogy Society. Over 28,000 death and marriage records reported in 40 years of the Troy Daily Whig for the years 1839 to 1878 will be added to the TIGS website in the next few months along with over 4,000 records of interment in St. Mary’s Cemetery in Troy.