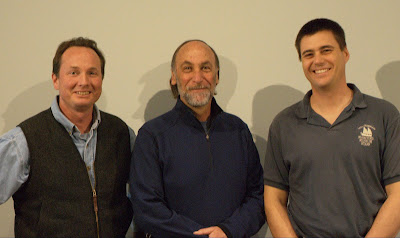 The Lake Champlain Maritime Museum (LCMM) is undergoing its first change in leadership in the 26 years since it was founded. Art Cohn and LCMM’s Board of Directors have just unveiled their transition plan for the next years of leadership for LCMM.

This fall, Art Cohn, co-founder and executive director, will take on the new role of Senior Advisor and Special Projects Director, while Erick Tichonuk and Adam Kane, both longtime members of the museum staff, will ascend to the position of Co-Executive Directors.

Tichonuk will have primary responsibility for the fleet, museum programs and operations, while Kane will be Archaeological Director of LCMM’s Maritime Research Institute. They will work in tandem on the overall leadership of LCMM.

In a letter sent to community leaders, museum members and supporters, Cohn explained “Several years ago I began to ponder the prospect of transition, and I came to believe that passing leadership of the museum to the next generation was perhaps the most important responsibility I would have. Over the years, I have focused very hard on identifying and recruiting the best and brightest to the museum with the hope and expectation that the next generation of leaders would be among them. I am pleased to report that they were.”

Sandy Jacobs, LCMM Board Chair from 2006 to 2009, and Darcey Hale, incoming Board Chair who took office on May 1, elaborated: “The museum is what it is today because of the vision that Art Cohn and Bob Beach had 26 years ago, Art’s skillful leadership, his devotion to every aspect of the institution and, most of all, his passion for everything that relates to Lake Champlain. As many of you have so aptly stated, ‘Art is the Maritime Museum.’ Adam Kane and Erick Tichonuk have worked closely with Art for many years, helping to shape the values and the culture of the museum, and they have been thoughtful and thorough in their proposal for carrying forward the Museum’s mission and vision. We are confident that under their leadership the museum will continue to grow and to flourish.” “Two more talented, dedicated and thoughtful people you could not find,” Cohn declared, “I am so pleased for them and for the museum family.”

The announcement comes as the Maritime Museum prepares to launch into a typically busy “open” season. Kane is deploying teams of LCMM nautical archaeologists to fieldwork and consultations in Onondaga Lake and Lake George as well as Lake Champlain, while Tichonuk directs the installation of the museum’s new exhibits, readies the Philadelphia II and Lois McClure for the new season, and works with waterfront communities around the lake in anticipation of the schooner’s “Farm and Forest” tour this summer. In the months ahead, LCMM’s Board and leadership staff will also be engaged in a strategic planning process that will chart LCMM’s future course. “This is a wonderful opportunity for all of us to reach out and celebrate the Lake Champlain Maritime Museum – past, present and future,” Hale exclaims. “We are sincerely grateful to all of the many people who over the years have demonstrated their support, interest, and belief that LCMM plays a vital role in the history and well being of our region and far beyond.” Cohn concurs: “We have just celebrated LCMM’s twenty-fifth anniversary year, and this positive transition plan provides assurance that the museum will build upon its accomplishments and be even more productive in the years to come.”