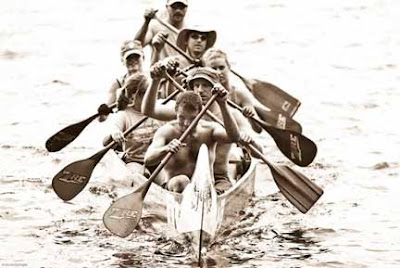 The &#822090-Miler&#8221 or Adirondack Canoe Classic is a canoe and guideboat race that celebrates the era of human-powered boats in the Adirondacks. The race begins in Old Forge, N.Y. and proceeds up the Fulton Chain of Lakes into Raquette Lake and on to the Saranac Lakes, finishing in the Village of Saranac Lake. In its 28th year, the event is so popular that registration is capped at 250 boats.

Special guest Nancie Battaglia will share photographs of the race, including her award winning aerial photo of the 90-miler chosen as one of Sports Illustrated&#8216-s 2009 Pictures of the Year. A renowned Lake Placid, N.Y. based photographer, Nancie Battaglia is a regular contributor to the New York Times and Adirondack Life magazine and shot the 2010 Winter Olympics in
Vancouver.

The ninety-mile water route from Old Forge to Saranac Lake forms what was known a century and a half ago as the &#8220Great Central Valley&#8221 of the Adirondacks. It was the best route through the wilderness at the time &#8211 easier travel than roads, which were distinguished by quagmires, corduroy, steep inclines, and rocks. The key to traveling via waterway was the Adirondack guideboat. The Great Central Valley is no longer the most efficient way to get through the Adirondacks, but still has tremendous appeal to people who follow it to experience the woods and waters as the original travelers did.

The Adirondack Museum invites all those who have taken part in the 90-Miler, to come and share your own stories of adventure.

Reservations must be made directly with the Midtown Athletic Club by calling (585) 461-2300.

Photo: Paddlers in the 90-Miler by Nancie Battaglia.