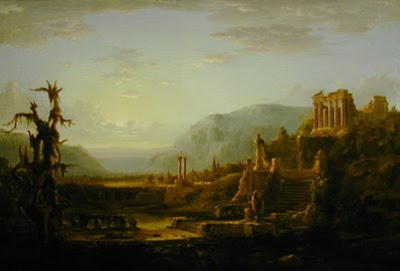 On May 1, 2011, the Thomas Cole National Historic Site opens Robert S. Duncanson: The Spiritual Striving of the Freedman’s Son, the first exhibition featuring the work of the nineteenth-century African-American landscape painter Robert S. Duncanson in many years, and, the first exhibition of his work to appear on the east coast, even in his lifetime. The exhibition will bring the work of this Ohio artist to the home of Thomas Cole, the founder of the Hudson River School and major influence on Duncanson.

Robert S. Duncanson was the first American landscape painter of African descent to gain international renown and occupies a critical position in the history of art. Widely celebrated for his landscape paintings, Duncanson began his career in the family trades of house painting and carpentry, before teaching himself art by painting portraits, genre scenes, and still-lifes. His success is remarkable as a “free colored person” who descended from generations of mulatto tradesmen, to graduate from skilled trades and participate in the Anglo-American art community.

Duncanson’s turn to landscape as his subject was influenced by Thomas Cole in the late 1840s. Based in Cincinnati, Ohio, then the largest and most prosperous city in the western United States, Duncanson became the cornerstone of the Ohio River Valley regional landscape painting school and, according to the Cincinnati Gazette declared that he &#8220enjoyed the enviable reputation of being the best landscape painter in the West.&#8221

Duncanson achieved his artistic success despite the oppressive restrictions that Anglo-American society placed on him as an African-American, a “free colored person.” His paintings earned him international attention with especially high esteem bestowed on him by the art press in Canada and England. Canadians acknowledged Duncanson’s seminal role as “one of the earliest of our professional cultivators of the fine arts.” And, the critics of the London Art Journal praised him as possessing “the skill of a master,” whose paintings “may compete with any of the modern British school.”

Duncanson adopted the style and metaphors of east coast landscape painting that depicted the “natural paradise” of the New World as a romantic symbol for the European settlers’ perceived covenant with God. But in so doing he also appropriated the art of landscape painting&#8211both in subject and content&#8211for African-American culture. In some of his paintings he subtly expressed the perspective of an African-American through his works.

A careful reading of his landscapes, reveals how Duncanson expressed his particular perspective. The grandson of a freedman, Duncanson’s artistic ambitions and the content of his paintings epitomize W.E.B. Du Bois’ statement that “the spiritual striving of the freedmen’s son is the travail of souls.”

Robert S. Duncanson: The Spiritual Striving of the Freeman’s Son is curated by Joseph D. Ketner. Ketner is the Henry and Lois Foster Chair in Contemporary Art and the Distinguished Curator-in-Residence at Emerson College in Boston. He is the author of a definitive book about the artist, The Emergence of the African-American Artist: Robert S. Duncanson 1821-1872. The catalogue for this exhibition will contain an essay by Ketner including new information on the artist and color illustrations of many new paintings discovered over the past fifteen years.

“We are honored to have Joseph Ketner, the authority on this fascinating Hudson River School artist, curate our 8th annual exhibition,” said Elizabeth Jacks, Executive Director of the Thomas Cole Site. “The artist’s work, which can be found in the permanent collections of major museums across the country, stands alone in its beauty. What makes this exhibition even more powerful, however, is the fact that Duncanson achieved his success under the oppressive conditions of being a ‘free colored person’ in antebellum United States.”

Robert S. Duncanson: The Spiritual Striving of the Freeman’s Son is on-view through October 30, 2011.

This exhibition is the 8th annual presentation of 19th Century landscape paintings at the Thomas Cole site, fostering a discussion of the influence of Thomas Cole on American culture through a generation of artists known as the Hudson River School. The Thomas Cole Historic Site is located at 218 Spring Street in Catskill, New York. For information call 518-943-7465 or visit www.thomascole.org.