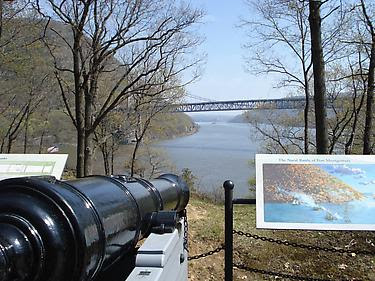 The Appalachian Trail is well known, but its history is not. Starting at the fort’s visitor center, participants will hike to the trail’s newly rerouted section on Bear Mountain, learning about its history, but stopping along the way to take in items of natural interest including indigenous plants, animals, trees, and geology. This is an intermediate/difficult hike, so bring your boots, water, and a snack.

British regulars, German mercenaries and Loyalist troops will be on site to give visitors a view of the non-rebellious side of the American Revolution.

Fort Montgomery’s own 5th NY Regiment will be garrisoning the fort and preparing for the campaign season by establishing a camp, conducting military drills and camp life activities, and firing the fort’s three cannons. Be prepared to be immersed in the action!

Trades people will be on hand demonstrating coopering, blacksmithing, broom-making, fishnet-weaving, hornsmithing, quilting, cider-making, Native-American skills and more! Try your own hand at one or more of these trades and help preserve history!

Sunday, June 5th, 9 AM: Birding at the Battlefield

Ever look out your back window and wonder to yourself “What kind of bird is that?” Find out once and for all by joining noted birder David Baker for a beginner bird walk through the ruins of Fort Montgomery. Discover which of our winged friends garrison themselves in the fort year-round and which ones are just on temporary posting.

In 1776 John Adams wrote to his wife Abigail “The second day of July 1776 will be the most memorable epocha in the history of America. I am apt to believe that it will be celebrated by succeeding generations as the great anniversary festival. It ought to be commemorated as the Day of Deliverance by solemn acts of devotion to God Almighty. It ought to be solemnized with pomp and parade, with shows, games, sports, guns, bells, bonfires, and illuminations from one end of this continent to the other from this time forward forever more.” Join us as we celebrate in true John Adams fashion the actual date that American Independence was declared, by firing the fort’s artillery, including “George”, the 32-pounder cannon.

Saturdays and Sundays in July and August: Musket Demonstrations at Noon and 3 PM, Artillery Demonstration at 1 PM**

Join us for the annual commemoration of the bloody October 6th 1777 assault on Forts Montgomery & Clinton with military drills, living history demonstrations, cannon firings and reenactment of the battle.

Tour the ruins of Fort Montgomery at night! Hear dramatic tales from the battle and bring yourself back to October 1777. Witness the fort come alive as re-enactors depict various scenes from the fort’s dark, dramatic history. Tours leaving from Fort Montgomery Visitor’s Center at 6:30 PM, 7:00 PM & 7:30 PM. Reservations required. Call 845-446-2134.