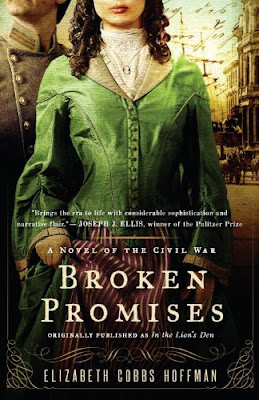 Originally self-published as In the Lion’s Den, Ballantine has published Hoffman’s novel for a broader audience just in time for the Civil War sesquicentennial.

In 1861, fearing that England will support the Confederate cause, President Lincoln sends Charles Francis Adams — son of John Quincy Adams — to London. Charles has long awaited an opportunity to make a significant impact on the Union his ancestors fought so hard to establish. But when he arrives, accompanied by his son, Henry, he discovers that the English are building warships for the South — and it may be too late to prevent dissolution.

As Charles embarks on a high-stakes game of espionage and diplomacy, his son reconnects with college friend Baxter Sams, a Southern doctor who has found a kindred spirit in Englishwoman Julia Birch. But Julia’s father reviles Americans — indeed, he is instrumental in supplying the warships that may help pull the nation apart — and Baxter finds himself torn between his growing love for Julia, his friendship with Henry, and his obligation to the Confederacy, when his father asks him to run medical supplies across the naval blockade. As tensions mount, irrevocable choices test the bonds of brothers, lovers, fathers, and sons—and change the fate of an entire country.

Based on the lives of the son and grandson of John Quincy Adams, as recorded in their memoirs and wartime correspondence, Broken Promises reveals how close America came to experiencing a very different future.

Elizabeth Cobbs Hoffman, PhD, is a winner of the Allan Nevins Prize for Literary Distinction in the Writing of History. She is currently a Hoover Institute Fellow at Stanford University and she holds the Dwight Stanford Chair in American foreign relations at San Diego State University. Dr. Hoffman is a native Californian, graduate of Stanford, wife, and mother of four. She is the author of several books of history. Broken Promises, which she began writing on a Fulbright grant, is her first novel.

One thought on “Broken Promises: A Novel of the Civil War”