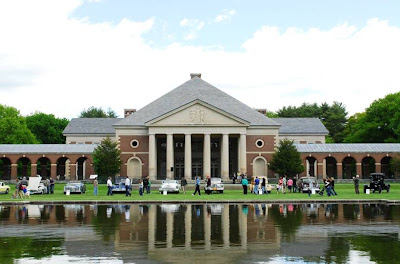 The Invitational field will be joined on Saturday by entrants in the “Euro Show” while Sunday’s co-feature will be the museum’s long-standing Spring Auto Show with judging in some two-dozen divisions. Enthusiasts will enjoy an entire weekend filled with unique, perfectly turned out vehicles representing all aspects of the automotive world and can count on seeing different cars each day.

“We sent out some 350 invitations to participate in the Saratoga Spring Invitational, which is growing into a destination event year by year, and responses are coming in steadily,” commented SAM Board Chairwoman Jean Hoffman. “Invitational participants will enjoy a wide variety of activities highlighting the area’s attractions, among them an evening in downtown Saratoga Springs, a visit to the outstanding automotive collection of Jim Taylor, a drive around Lake George with a visit to the historic Lake George Club and the opening of the museum’s new exhibit, “Forza Italia,” with remarks by our highly respected exhibit curator, Ken Gross.”

A nationally recognized author and expert on everything automotive from antiques to classic cars to hot rods, Gross will acquaint the audience with the details and seldom heard facts that make the various automobiles worthy of being included in the exhibit. The “Forza Italia” exhibit will be highlighted by a half-dozen automobiles on loan from nationally known collector Oscar Davis, a frequent winner in Pebble Beach judging over the years.

Enthusiasts visiting the Invitational, which will open at 10:30 am both Saturday and Sunday, will be able to inspect a wide variety of classic and special interest automobiles. Early entrants include a 1931 Pierce-Arrow and 1947 Cadillac owned by Tony Zappone, Bill Cook’s 1962 Daimler SR 250, a 1966 Yenko Corvair owned by Bill Cotrofeld, Bill and Marie Burke’s 1949 Packard and Joe Verillo’s 1965 Corvette Convertible.

But by show day, judges Al McEwan, Peter Hageman, Ken Gross, Tom Cotter and Grand Marshall Ed Herrmann, all Pebble Beach Concours d’Elegance veterans, will have scores of perfectly turned out automobiles to consider before the winners are revealed on the red carpet at the Sunday afternoon awards ceremony.

Other weekend highlights will include a display of vintage open cockpit race cars on Sunday courtesy of the Atlantic Coast Old Timers and a number of sports cars, both historic and modern, from the Mo-Hud region of the Sports Car Club of America. And for those who have always wanted to get a taste of competition, a simulator that will recreate the experience of driving a race car around Connecticut’s famed Lime Rock Park road will be on hand. Also on tap are a variety of activities for children, including the Price Chopper Hopper” and the Tri-City Valley Cats pitching experience.

More information, including registration procedures for the car shows, is available online. Registration forms can also be filled out in person at the museum’s admissions desk during normal business hours.