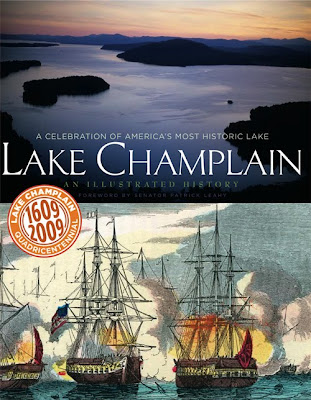 The eastern edge of the Adirondack Park stretches into the middle of Lake Champlain, that great river-lake 120 miles long, four times the size of Lake George. Standing between the states of New York and Vermont, it’s the largest body of water in the Adirondacks, one that connects Whitehall and (via the Champlain Canal and Hudson River) New York City to Quebec’s Richelieu River and the St. Lawrence River. Two routes inland from the Atlantic Ocean that have had a historic impact on the entire North County, New York and Vermont. The book Lake Champlain: An Illustrated History celebrates what is unquestionably America’s most historic lake.


Four hundred years of Champlain history are conveyed in the coffee-table book’s more than 300 color photographs, drawings, maps and vintage images. Chapters on the towns along the lake, the Chaplain basin’s First Peoples, it’s critical military and transportation history, and the sports and recreation opportunities are eloquently contextualized by regional writers, including occasional Almanack contributor Chris Shaw who provides the book’s Prologue and Epilogue, and Russ Bellico who offers a chapter entitled &#8220Highway to Empire&#8221.

Published by Adirondack Life in Jay, Lake Champlain: An Illustrated History is a great book for those who love the lake, local and state history buffs, and nature lovers.

You can pick up a copy online.

You can here an interview with the book’s editor Mike McCaskey on the Vermont Public Radio website.