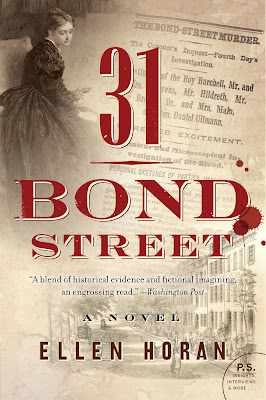 31 Bond Street transports readers back to New York City in 1857, to a gripping murder case known as the ‘Bond Street Murder.’ Horan discovered a yellowed newspaper page in a print shop and her research soon uncovered one of the most sensational trials of the century, occupying front pages as the nation grappled with the perils of the impending Civil War.

The story begins during on a blustery January morning when a wealthy dentist, Dr. Harvey Burdell, is found brutally murdered in his sumptuous townhouse at 31 Bond Street in Manhattan. An attractive widow, Emma Cunningham, becomes the prime suspect. Emma Cunningham’s fate is placed in the hands of two lawyers: the idealistic defense attorney, Henry Clinton, and the District Attorney, Abraham Oakey Hall, who aspires to be mayor.

With Cunningham’s life on the line, Clinton applies the new science of forensic analysis in an attempt to spare her from the gallows. The murder case uncovers tensions and rifts in the upstairs-downstairs world of 31 Bond Street, as well the city at large. As a woman seeking security for herself and her daughters through marriage, Emma Cunningham made the fatal mistake of placing her trust in the unscrupulous Dr. Burdell, whose world included financiers who plot for land and power, corrupt politicians, a conspiracy of slavers and a courageous black carriage driver who has witnessed too much.

The new paperback’s PS section includes an interview with author, the story behind the book, and more.

Ellen Horan has worked as a studio artist and as a photo editor for magazines and books in New York City. She lives in downtown Manhattan, the setting of her first novel. Her website is http://www.31bondstreet.com/.