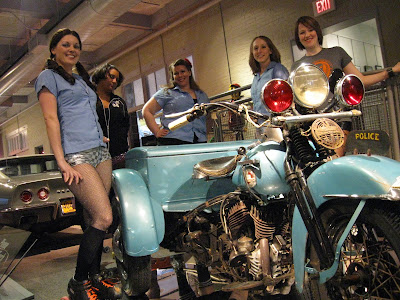 On Saturday March 5th, Saratoga Automobile Museum is celebrating their 2nd Beer and Burgers fundraiser from 6:00 pm to 9:00 pm. The event features micro-brews and local beers, live entertainment, and food by local chef Kim Klopstock served car-hop style by the women of the Albany All Stars Roller Derby.

This year’s featured exhibition includes Right Coast Rods, Historic Roadsters & Coupes from the 1950s in the main gallery of the Museum. The second floor gallery will host vehicles made in New York along with Racing in New York exhibit.

“We have put together a wide variety of Micro Brews that will delight your taste buds,” Richard Selikoff, Development Director for the Museum, said. “You will be able to sample brews from Saratoga Brewing, Goose Island, Redhook, Windmere Bros., Davidson Bros., Ommergang, Kona and Shock Top. Sliders will be once again on tap by master chef Kim Klopstock from Lily and the Rose, she is promising to have a full selection of veggie burgers as well. Burgers are not the only thing on the menu for the evening, there will be a full selection of side dishes to compliment the beer and the burgers.&#8221 Two bands from Schenectady, Summer of Doug and The Uncle Bootsy Project will provide entertainment.