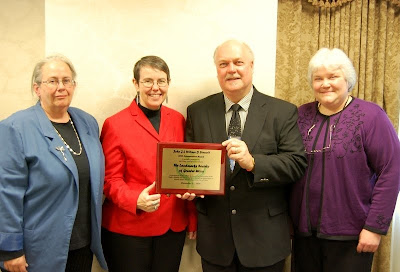 Landmarks Society of Greater Utica President Michael Bosak accepted the John J. and Wilma B. Sinnott 2010 Conservation Award at a brunch held in December at the Hotel Utica. The award, administered by the Utica Zoological Society and presented by the late Mr. and Mrs. Sinnott’s daughters – Allison (of West Winfield) and Deirdre (of New York City) – was established by the Sinnott family nine years ago to recognize organizations and individuals that support the preservation of the Earth’s wildlife and natural resources.

The Landmarks Society was recognized for its extraordinary efforts in preserving community architectural and cultural resources of major importance. The award consists of a plaque and a $500 contribution to further the work of the Landmarks Society.

For more information about The Landmarks Society of Greater Utica, visist them online, call them at 315-732-7376, or e-mail [email protected]