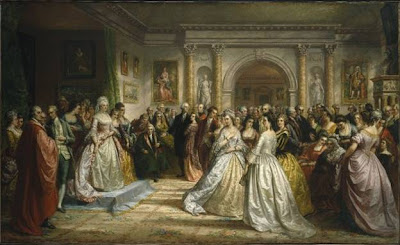 The Jay Heritage Center (JHC) celebrated the recent anniversary of John Jay’s birthday on December 12 with news of an extraordinary gift from one of his descendants. In celebration of the continued restoration of the 1838 Jay House in Rye, Ada Hastings of Great Barrington, Massachusetts and her family magnanimously donated a portrait of John Jay’s great granddaughter that once hung in the mansion’s Drawing Room. The luminescent painting of a young Alice Jay by pre-eminent artist Daniel Huntington is documented in sepia toned family photos from 1886- it is visible hanging in a prominent location next to two other famous artworks originally owned by the Jays of Rye: Gilbert Stuart’s portrait of John Jay (which today is on view at the National Gallery in Washington, D.C.) and Asher Durand’s depiction of Peter Augustus Jay (which belongs to New York Hospital where Peter Augustus Jay served as President of the Board.

The young subject of the painting, Alice Jay, along with her parents and siblings, lived both in New York and at the Rye estate during the mid and late 19th century. Windows into Alice’s life and times, particularly during the Civil War, are well documented in family letters and diaries. Alice’s father, Dr. John Clarkson Jay, was John Jay’s grandson and a vocal opponent of slavery like his grandfather and father before him. Through the local Episcopal church where he served on the vestry, he was instrumental in spearheading efforts in Rye to recruit volunteers for the Union efforts during the Civil War, a campaign which drew enlistments from Alice’s two older brothers, Peter, who became Captain of a local militia, and John, who served as an assistant surgeon. Alice’s sister kept a diary in which she wrote proudly in 1862, “Rye is called the banner town of the county for she has raised more men by volunteering than any of the other towns.”

The artist of the painting, New Yorker Daniel Huntington (1816 – 1906), trained with Jay family friends and esteemed colleagues like John Trumbull (who accompanied Jay as his secretary to Europe during treaty negotiations but also achieved renown as a painter, most notably for his grand scale Declaration of Independence now at the Capitol Rotunda) and Samuel F. B. Morse (whose successful career as an artist preceded his renown as an inventor and earned him the nickname of “America’s Da Vinci.”) Under the tutelage of men like these, Huntington rose to prominence both during and after the Civil War. He was a member of the National Academy of Design for most of his life and acted as its President for 22 years- he was also Vice-President of the Metropolitan Museum of Art for 33 years and helped that institution expand and grow in stature. 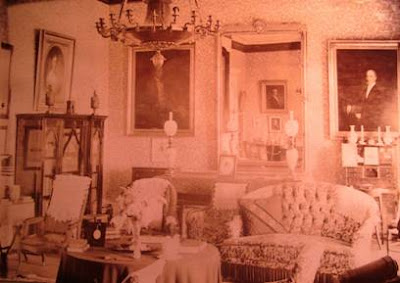 Perhaps Huntington’s most recognizable work, The Republican Court, was completed in 1861 at the start of one of our nation’s bloodiest engagements. His tableau harkened back to what was sentimentally remembered as a more harmonious time between the states &#8212- the initial founding of our union &#8211and it represented an idealized assembly of the leaders of that period (Northern and Southern) in a European, court like setting. The image prominently features John Jay and Sarah Livingston Jay and 62 other identifiable personages of the Revolutionary War. Huntington’s painting was reproduced in 1865 as a very popular engraving. The larger original oil painting is owned by the Brooklyn Museum of Art.

Winter hours for the Jay Heritage Center are Tuesday through Friday, 10am &#8211 5pm and by appointment. Please call (914) 698-9275 or contact JHC Program Director, Heather Craane at [email protected] to schedule group or school tours. The Jay Heritage Center’s Exhibit commemorating the 150th Anniversary of the Civil War, “The Jays and the Abolition of Slavery: From Manumission to Emancipation” will open in May 2011.

John Jay’s home in Rye is a National Historic Landmark and a designated site of the Hudson River Valley National Heritage Area selected for its themes of Environment, Landscape and Gardens, Architecture and Freedom and Dignity. It is one of 13 sites on Westchester County’s African American Heritage Trail.

Illustrations: Above, &#8220The Republican Court&#8221 by Daniel Huntington (1861, Brooklyn Museum of Art). John Jay is depicted in the crimson robe on the far left and Sarah Livingston Jay is opposite him in white in the right foreground. An engraving based on this painting was recently donated to the Jay Heritage Center. Middle, &#8220Alice Jay&#8221 by Daniel Huntington- Below, an 1886 photograph of the Jay Drawing Room. Gilbert Stuart’s portrait of Jay is on the left of the mirror and Asher Durand’s portrait of Jay’s eldest son Peter is on the right.