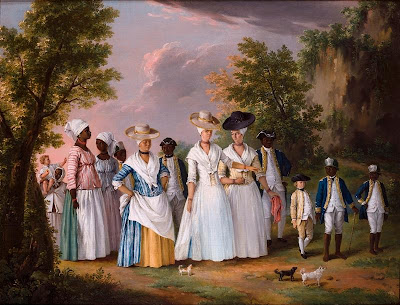 The Brooklyn Museum has acquired, by purchase from the London Gallery Robilant + Voena, Agostino Brunias’s (1730-1796) painting &#8220Free Women of Color with Their Children and Servants in a Landscape,&#8221 (circa 1764-96), a portrait of the eighteenth-century mixed-race colonial elite of the island of Dominica in the West Indies. Brunias, a London-based Italian painter, left England at the height of his career to chronicle Dominica, then one of Britain’s newest colonies in the Lesser Antilles.

The painting depicts two richly dressed mixed race women, one of whom was possibly the wife of the artist’s patron. They are shown accompanied by their mother and their children, along with eight African servants, as they walk on the grounds of a sugar plantation, one of the agricultural estates that were Dominica’s chief source of wealth. Brunias documents colonial women of color as privileged and prosperous. The two wealthy sisters are distinguished from their mother and servants by their fitted European dresses.

The painting is a Caribbean version of contemporaneous English works made popular by artists such as William Hogarth and Thomas Gainsborough, whose art often depicts the landed gentry engaged in leisurely pursuits. Free Women of Color with Their Children and Servants in a Landscape and other Caribbean paintings by Brunias, celebrate the diversity of European, Caribbean, and African influences in the region.

Although Brunias was originally commissioned to promote upper-class plantation life, his works soon assumed a more subversive, political role throughout the Caribbean as endorsements of a free, anti-slavery society, exposing the artificialities of racial hierarchies in the West Indies. Among his supporters was Haiti’s liberator Francois-Dominique Toussaint L’Ouverture, who wore on his waistcoat eighteen buttons decorated with reproductions of Brunias’s paintings.

&#8220Free Women of Color with Their Children and Servants in a Landscape&#8221 will go on view on March 7, 2011 in the European galleries on the portraiture wall between contemporaneous female Spanish colonial and French subjects.

The painting will also be featured in an upcoming Spanish colonial exhibition organized by Rich Aste, Curator of European Art, which is tentatively slated for 2013. Building on the Brooklyn exhibition Converging Cultures: Art & Identity in Spanish America (1996), the upcoming presentation will focus on private art collecting in the colonial Andes and Mexico. Through more than two hundred paintings, drawings, prints, sculpture, and decorative arts from Brooklyn’s European and Spanish and British colonial collections, visitors will get a rare glimpse of the private homes of the colonial elite, who acquired and commissioned sacred and profane works of art as signifiers of their faith, wealth, and status.