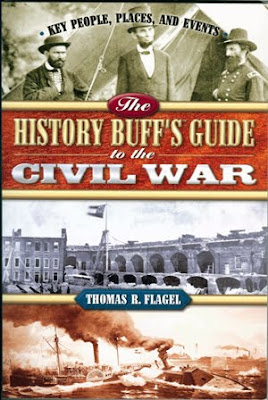 The 150th anniversary of the American Civil War is just months away, and the conflict’s very language still resonates within our national narrative. Texas rumbles with the sounds of secession. &#8220States’ rights&#8221 remains a battle cry over boarder security, civil unions, and taxation. Groundswells against federalism have given birth to a political faction. The country still struggles with issues concerning race.

Author and historian Thomas R. Flagel offers a new and provocative perspective on the very source of these crises, through his newest edition of The History Buff’s Guide to the Civil War.

Nearly 150 years later, the war that divided our nation continues to fascinate history buffs and reenactment enthusiasts across the U.S. Offering a new take on how to enjoy one of the most complex and critical eras in American history, Flagel has cleared the powder smoke with the fun, quirky and absorbing compilation of the best, the worst, the largest, and the most lethal top ten rankings of the Civil War.

The History Buff’s Guide to the Civil War will provide a deeper clarity and perspective on every aspect of the war. The Second edition complete with new content and updated lists will have you debating the new and intriguing questions.

Thomas R. Flagel teaches American History at Columbia State Community College in Tennessee. He holds degrees from Loras College, Kansas State University, Creighton University, and has studied at the University of Vienna. Author of books on the Civil War, World War II, and the American Presidency, he is currently working on a volume concerning Abraham Lincoln. Flagel lives in Franklin, Tennessee, where he is on the Mayor’s Battlefield Commission, the Carter House Board, and the Franklin Civil War Round Table board.