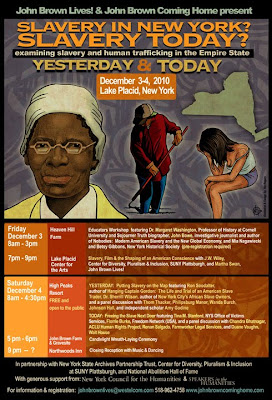 In farm fields, artisan workshops, private homes, and brothels then- in fields and orchards, restaurants, factories, private homes and sex-oriented businesses, now—American and foreign-born women, men and children are trafficked and enslaved across New York State.

As the Syracuse Post Standard recently reported, it is as close as the New York State Fair held every summer. According to the Post Standard, a restaurant vendor from Queens was charged earlier this month with allegedly trafficking workers from Mexico to work at the Fair, mistreating and barely paying them, if at all.

“We have both the past and the present to reckon with,” said Martha Swan, Director of the freedom education project John Brown Lives! “Although largely erased from official history and collective memory, New York “promoted, prolonged and profited from” slavery from the 1620s through the 1850s. It continues today, often hidden in plain sight.

“We have organized a two-day Anti-Slavery Convention to put slavery &#8220on the map&#8221 as a reality not solely of the South but of New York- and not as a relic but a legacy and crime against humanity still with us today.”

The Convention will be held in Lake Placid, NY, on December 3-4, 2010 and will feature experts on contemporary slavery and human trafficking, scholars, historians, victims advocates, lawyers, artists, and musicians joining with the general public to examine slavery and trafficking in New York State and ways to end it.

The Convention will include a full-day workshop for educators, teaching artists, and librarians at Heaven Hill Farm on Friday, December 3. Advance registration and a $55 fee are required. Call 518-962-4758 to register.

Later that evening at Lake Placid Center for the Arts, Dr. J.W. Wiley from SUNY Plattsburgh’s Center for Diversity, Pluralism & Inclusion will show film clips and lead a lively conversation on how film has shaped American’s perceptions of slavery and race. The event, from 7:00 – 9:00 p.m., is free and open to the public.

From 8:00 a.m. – 5:00 p.m. on Saturday, December 4, the Convention will continue at High Peaks Resort on Main Street in Lake Placid with keynote addresses and panel discussions ranging from historical slavery in New York State to up-to-the-minute reports and analysis on slavery and trafficking today.

Dr. Thomas Hopkins, descendent of Harpers Ferry Raider John A. Copeland, will help bring the Convention to a close with a candlelight wreath-laying ceremony at the John Brown Farm State Historic Site at 5:00 p.m..

The Anti-Slavery Convention is funded, in part, with support from the New York Council for the Humanities. For more information or a full schedule of events, call 518-962-4758 or go to www.johnbrowncominghome.org.