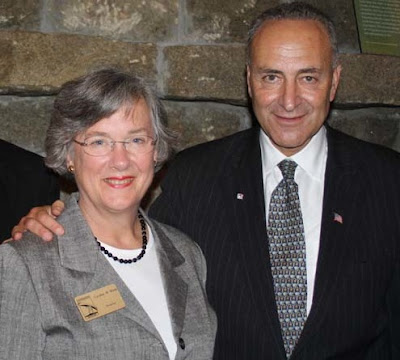 The Board of Directors of the Adirondack Historical Association announced today that Caroline M. Welsh, the Director of the Adirondack Museum since 2007, has been replaced by Michael Lombardi, the current Director of Finance and Operations. Lombardi is being named Interim Director, and Welsh, who has been with the museum since 1987, will become Senior Art Historian and Director Emerita.

Welsh served the Adirondack Museum for over two decades, first as a Curator and then as Director. Just two months after her ascension to the top spot in February 2007, the museum unveiled its ill-fated and sometimes controversial plan to build a museum extension in Lake Placid. Those plans were later abandoned, and the former Adirondack Church of the Nazarene that had been located on the site was demolished.

This past fall, the museum also closed their Lake Placid storefront operation. &#8220The subsequent and continuing economic downturn have forced a strategic re-thinking of the museum’s plans,&#8221 Adirondack Museum spokesperson Katherine Moore told the press at the time. &#8220It is no longer feasible to operate two retail operations and maintain a growing online sales presence.&#8221 Moore said the museum will concentrate its efforts and financial resources on the Blue Mountain Lake campus.

Welsh’s tenure also saw a number of new initiatives designed to bring the museum into the 21st century including launching a museum online photostream, a campus WiFi system, and offering virtual exhibits. She also oversaw the museum during the acquisition of the Clarence Petty and Richard Lawrence collections, and receipt of a $1.3 million bequest from the estate of the Mr. and Mrs. Horace N. Holbrook of Schenectady.

Today spokesperson Moore said &#8220Ms. Welsh will continue her relationship with the museum with respect to art projects including the upcoming Arthur Fitzwilliam Tait exhibit opening in the summer, 2011, along with producing the catalogue for the exhibit.&#8221 Welsh will also collaborate with the museum on other upcoming projects, she said.

Caroline Welsh is the wife of former Adirondack Museum Curator Peter C. Welsh, once also editor of the Journal of History and director of the New York State Historical Association, who held the primary responsibility for the Adirondack Museum’s logging exhibit. He was also the author of Jacks, Jobbers, and Kings: Logging in the Adirondacks, 1850-1950. Peter Welsh died in February, 2010.