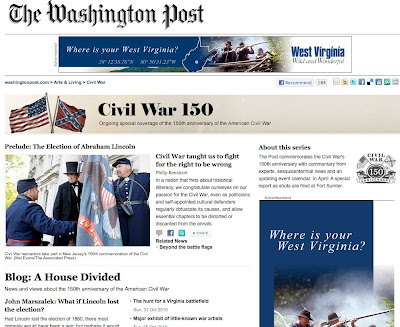 Marking the 150th anniversary of the Civil War, the Washington Post newspaper will provide special ongoing coverage with commentary from experts, sesquicentennial news and an updating event calendar at a new site, Civil War 150.

A sampling of some of the articles and features on the site includes articles like &#8220The Civil War taught us to fight for the right to be wrong&#8221 and &#8220Civil War panelists join ‘A House Divided’: If Lincoln hadn’t won the election, would there have been a war?&#8221 Interactive features include a photo request for reenactors, a photo gallery &#8220Washington, D.C.: 1860 and today&#8220, a quiz entitled &#8220How well do you know Abe?&#8220, and a Civil War events guide.

April 2011 will mark the 150th Anniversary of the firing on Fort Sumter and the start of the American Civil War. While the State of Vermont has laid out preliminary plans for the multi-year observance that include several large statewide events, as well as coordination of community-based activities, New York State has nothing planned and no organization set to undertake commemoration planning.

New York provided 400,000-460,000 men during the war, nearly 21% of all the men in the state and more than half of those under the age of 30. By the time the Civil War ended in 1865, New York had provided the Union Army with 27 regiments of cavalry, 15 regiments of artillery, 8 of engineers, and 248 of infantry.[5] Federal records indicate 4,125 free blacks from New York served in the Union Army, and three full regiments of United States Colored Troops were raised and organized in the Empire State—the 20th, 26th, and 31st USCT.

No actual Civil War battles were fought within the Empire State, although Confederate agents did set several fires in New York City. New York troops were prominent in virtually every major battle in the Eastern Theater, and some in the Western Theater. New Yorker John Schofield rose to command of the Army of the Ohio and won the Battle of Franklin, dealing a serious blow to Confederate hopes in Tennessee.

More than 27,000 New Yorkers fought in the war’s bloodiest battle, the three-day Battle of Gettysburg in July 1863. During the entire war, 834 officers were killed in action, as well as 12,142 enlisted men. Another 7,235 officers and men perished from their wounds, and 27,855 died from disease. Another 5,766 were estimated to have perished while incarcerated in Southern prisoner-of-war camps.