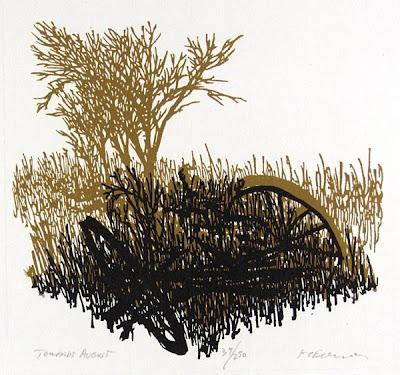 The first exhibition of its kind &#8212- “The Landscape of Memory: Prints by Frank C. Eckmair” &#8212- opens at the New York State Museum November 19 showcasing the works of one of the nation’s most accomplished printmakers.

Open until September 18, 2011 in Crossroads Gallery, the exhibition comes from the Museum’s own 386-piece collection, which is the largest museum collection of Eckmair’s works that exists. The Museum’s curatorial and exhibition team worked with Eckmair during the last few years to archive his lifework, document the way he makes the prints and develop the exhibition.

The exhibition features more than 80 works, mostly landscapes, which include framed woodcut prints, as well as wood engravings, sculptures and the original woodblocks that track Eckmair’s career as an artist and lifelong resident of Gilbertsville in central New York. Also included are wood engraving tools and an early 20th-century Poco Proof printing press, on loan from Eckmair.

While growing up in central New York, Eckmair developed an affinity for the quiet landscape of the rural areas of that part of the state. His subjects are its farm fields, stone walls, abandoned homes, and old barns.

Although he did all kinds of printmaking Eckmair preferred woodcuts, noting that “wood is a poor man’s material.”

During the 1950s, printmaking grew in stature in New York with the rise of the New York School, a group of artists, poets, and musicians centered in the city. On Long Island, the influential Universal Limited Art Editions studio encouraged collaborations between artists and writers, provided

printmaking space, and brought prints to collectors, galleries, and museums. Finally, the explosive growth of State University of New York campuses during the postwar period led to the establishment of major printmaking programs that are still operating today.

Born in 1930, Eckmair spent his early years drawing and working at his father’s hotel in Gilbertsville, a small village in Otsego County, west of Cooperstown. He earned a Bachelor of Arts degree from the State University of Iowa, where he studied with Mauricio Lasansky, who is considered to be the “father of 20th-century American printmaking.” After teaching public school, Eckmair served in the U.S. Air Force in Korea, Japan, and the northwestern United States. He then received a Master of Fine Arts in printmaking from Ohio University. From 1963 to 1995 he was a key figure in the print studio of Buffalo State College, where he was a revered professor and influenced a generation of artists. While working in Buffalo, he maintained his family residence in Gilbertsville.

Eckmair’s work received its earliest recognition through American Associated Artists (AAA), a program founded to market affordable fine art prints to the American public. Like earlier artists such as Grant Wood, John Steuart Curry, and Thomas Hart Benton, Eckmair created prints of regional landscapes for AAA that had great populist appeal. Considered a master of the woodcut and represented in major collections around the world, Eckmair continues to create haunting works evoking rural life in upstate New York. He is the artistic director of Birch Book Press, a publisher of hand-crafted letterpress books and art.

Further information can be obtained by calling (518) 474-5877 or visiting the museum website at www.nysm.nysed.gov.