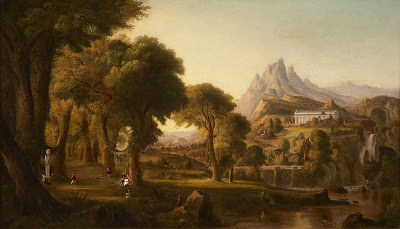 The Brooklyn Museum is inaugurating a new collecting initiative that will focus on the acquisition of works by African American artists that were created between the mid-nineteenth century and 1945. In the first three years, the Museum is seeking to raise a minimum of $500,000 for this ongoing dedicated purchase fund, together with gifts of works of art. The project has already received $100,000, with an additional $100,000 to be given as a matching grant, from Museum Trustee Saundra Williams-Cornwell and her husband, Don Cornwell. Additionally, the promised gift of a major painting, Dream of Arcadia after Thomas Cole (1852) by Robert S. Duncanson, has been given by Museum Trustee Charlynn Goins and her husband, Dr. Warren Goins. Ms. Cornwell and Ms. Goins are both initiators of the project, along with former Trustee Tracey G. Riese.

Additional funds, which will go toward matching the Cornwell’s contribution, will be raised through a benefit dinner to take place on January 19, 2011, from 7 until 10 p.m. at the studio of Brooklyn-based artist Mickalene Thomas. This event is being guided by a steering committee chaired by Ms. Cornwell, Ms. Goins, and Ms. Riese. Individual tickets range from $500 to $1,000, and tables are available from $5,000 to $15,000. Introductory events for this newly initiated purchase fund took place this past February at the Swann Auction Galleries in New York, followed several weeks later by a dinner at the home of Museum Director Arnold L. Lehman and Pamela Lehman.

&#8220This important new collecting initiative signals a deeper commitment by the Brooklyn Museum in building collections that are distinguished by the diversity of the artists represented. It will expand and enrich the Museum’s exceptional holdings of American art and will parallel what is already under way with our contemporary holdings. We are enormously grateful for the exceptionally generous gifts from our Trustees that will inaugurate this important undertaking,&#8221 states Arnold Lehman.

&#8220The purchases and gifts made possible by this project will take their place in our current presentation of one of the largest and most important collections of historic American art in the United States and will allow us to celebrate more fully the long and rich tradition of African American artistic production,&#8221 states Teresa A. Carbone, Andrew W. Mellon Curator of American Art and Managing Curator, Arts of the Americas and Europe. Dr. Carbone has worked closely with the steering committee on the implementation of the project.

Since 1940, when the Brooklyn Museum was the New York venue for the landmark exhibition The Negro Artist Comes of Age, the Museum has actively sought to showcase the work of African American artists. The Museum has also presented landmark survey exhibitions including Two Centuries of Black American Art (1977), Black Folk Art in America (1982), Facing History: The Black Image in American Art, 1710-1940 (1990), Alone in a Crowd: Prints of the 1930s and 1940s by African-American Artists (1996), and Committed to the Image: Contemporary Black Photographers (2001).

· Saundra Williams-Cornwell, a Brooklyn Museum Trustee since 2003, practiced law in New York for a decade. She has served on the boards of the Manhattan Theater Club, the Continuum Health Partners, and the Brooklyn Heights Association. She is a Chair of the Community Investment Committee of the Board of the United Way of New York City. She and her husband collect twentieth-century African American Art.

· After a career in the financial-services industry, Charlynn Goins, a Brooklyn Museum Trustee since 2003, is also the Chairman of the New York Community Trust. She is an independent trustee of New York Life Insurance Company’s Mainstay Funds and a member of the Council on Foreign Relations. She is a graduate of Barnard College and Columbia Law School. Ms. Goins and her husband collect African American art, with a focus on nineteenth-century paintings.

· Tracy Riese is founder and president of T.G. Riese & Associates, Ltd., a branding and communication consultancy serving public and private organizations. She previously held positions at Revlon, RJR Nabisco, Chemical Bank, Young & Rubicam, Burson- Marsteller, and Sotheby’s, where she helped form their corporate art advisory service. She is currently on the boards of A Better Chance, the Hunter College Foundation, and of El Museo del Barrio. She and her husband live in Manhattan and collect contemporary art and twentieth-century furniture and design.