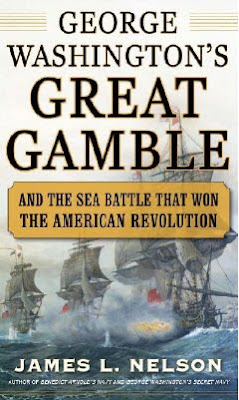 Fort Ticonderoga’s 2010 Author Series concludes on Sunday, October 17th, with James Nelson, author of George Washington’s Great Gamble: And the Sea Battle That Won the American Revolution. The program takes place in the Deborah Clarke Mars Education Center at Fort Ticonderoga at 2:00 p.m., followed by a book signing at 3:00 p.m. in the Fort Ticonderoga Museum Store. The program is included in the cost of admission.

In George Washington’s Great Gamble, Nelson tells the story of the greatest naval engagement of the American Revolution. In the opening months of 1781, General George Washington feared his army would not survive the coming campaign season. The spring and summer only served to reinforce his despair, but in late summer the changing circumstances of war presented a once-in-a-war opportunity for a French armada to hold off the mighty British navy while his own troops with French reinforcements would drive Lord Cornwallis’s forces to the Chesapeake. The Battle of the Capes would prove the only time the French ever fought the Royal Navy to a draw- but for the British army it was a catastrophe, leading to Cornwallis’s surrender at Yorktown.

James L. Nelson is the author of 15 works of fiction and nonfiction. His novels include the five books of his “Revolution at Sea” saga and three in his “Brethren of the Coast” series. His novel Glory in the Name won the American Library Association’s W.Y. Boyd Literary Award for Best Military Fiction. He is also the author of Benedict Arnold’s Navy and George Washington’s Secret Navy, which earned the Samuel Eliot Morison Award.