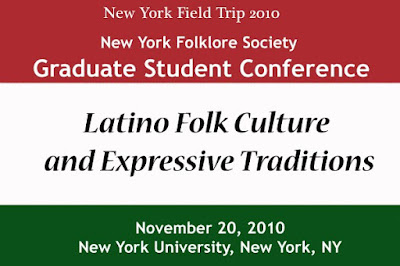 For over 65 years, the New York Folklore Society (NYFS) has held an annual conference, typically with guest speakers, such as master artists and academic scholars, who have addressed a particular theme. This year, in collaboration with NYU’s Latino Studies and Latin American Studies Departments, NYFS seeks to encourage young scholars to continue their studies and become active contributors to the fields of folklore, ethnomusicology, anthropology and more.

A preliminary schedule can be found online. Registration is $20.00 for Members of the New York Folklore Society, $25.00 for non-members, and free for students. For more further information or to register, call (518) 346-7008, e-mail nyfs@nyfolklore.org, or visit their website.

The New York Folklore Society is a statewide service organization, serving the field of folk and traditional arts in New York State. Besides an annual conference, NYFS publishes a semi-annual peer-reviewed journal, and provides technical assistance and professional development opportunities for folklorists, community scholars, folk and traditional artists, and community based cultural organization.