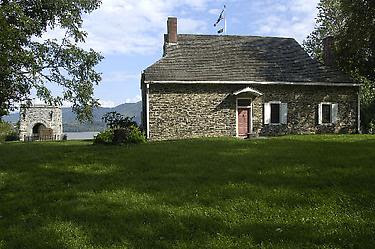 Ever wonder what it was like to be a guest at General and Mrs. Washington’s headquarters? Come to Washington’s Headquarters State Historic Site on Sunday, September 12th and find out what an 18th century visitor could expect when you accompany Cornelia Tappan Clinton on tour. These special tours by reservation only are scheduled at 1:00 PM and 3:00 PM.

Mrs. Clinton, wife of New York’s first governor, George Clinton, will guide you through the Hasbrouck house rented by her dear friends, the Washingtons. In the course of this First Person Experiential Tour, Mrs. Clinton will not only touch upon her friendship with Martha Washington, but also on her own life. This was a lady who witnessed the burning of Kingston, the smallpox epidemic that followed, and the migration of survivors to safer grounds. In her Dutch-tinted accent, Mrs. Clinton will explain how her family survived. To her way of thinking, surmounting these problems was not that difficult as long as the family was able to stay together.

Coming from an old and prominent Dutch family, Cornelia Tappan married George Clinton, a lawyer from Little Britain, and the couple set about to establish themselves in Orange County, to live, work, and raise their family. In time, Mr. Clinton became an officer in the Continental Army during the Revolutionary War and Cornelia was called upon to keep the family together, save whatever crops from her farm she could salvage and keep her children safe. She rose to the occasion admirably.