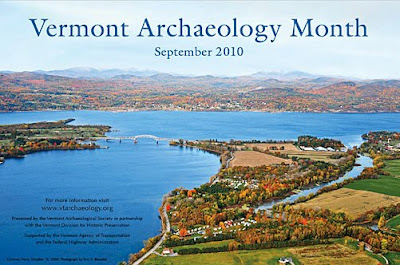 Events ranging from a canoeing trip to the site of an ancient Native American village to a lecture on the sinking and discovery of the Civil War ironclad U.S.S. Monitor are on tap during Vermont Archaeology Month.

The Vermont Archaeological Society and Vermont Division for Historic Preservation are presenting events around the state to celebrate the importance of archaeology to the state.

“We’re very pleased that Governor Jim Douglas has proclaimed September Vermont Archaeology Month,” said Giovanna Peebles, director of the Division for Historic Preservation and Vermont State Archaeologist. “The role of archaeology in understanding Vermont’s past and charting its future can’t be overstated.”

“This slate of events really has something for everybody,” said Shirley Paustian, Vermont Archaeological Society President. “From active outdoor events like hikes and canoe trips, to lectures and hands-on workshops in pottery making and flint-knapping, people of all ages and interests can find something.”

Formed in 1968, The Vermont Archaeological Society (VAS) is a non-profit volunteer organization comprised of professional and avocational archaeologists and the interested public, and is committed to raising the awareness of Vermont’s past, while at the same time protecting its valuable cultural resources from injury and exploitation.

The Division for Historic Preservation is the public agency designated to be the advocate for historic and prehistoric resources in Vermont. It is located within the Agency of Commerce and Community Development.

For a full schedule of events or more information visit: http://vtarchaeology.org/ or www.Historicvermont.org.