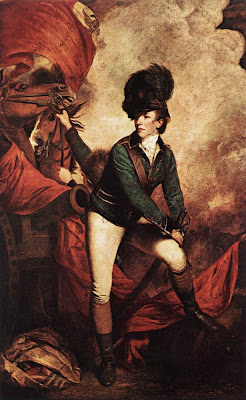 While King George III was certainly reviled by the American colonists during the Revolutionary War, he was by no means the most hated man on the continent at the time.

That honor went to Major Banastre “Ban” Tarleton, the infamous commander of the Green Dragoons, and the Vermont Division for Historic Preservation is presenting an opportunity to “meet” this historic figure at 7:30 p.m. on Friday, September 24, at the Old First Church barn in Bennington.

“English actor-playwright Howard Burnham really brings these figures from the past to life with his one-man costumed performances,” said Bennington Battle Monument site administrator Marylou Chicote. “He will reminisce – in his old age – about his colorful life and times in America and his legacy.”

Tarleton was the son of a wealthy Liverpool merchant and mayor, but it is reputed that while attending Oxford University the younger Tarleton’s two most successful activities were athletics and gambling.

He reportedly inherited 5,000 pounds upon his father’s death in 1773 and promptly lost it gambling in a year, forcing his family to scrape together enough money to purchase him a commission in the King’s Dragoon Guards in 1775.

Tarleton volunteered to sail to America later that year where he served under both Lord Charles Cornwallis and Gen. William Howe in the attempt to suppress the rebellion. He rose to the rank of brigade major of cavalry and was given command of the British Legion, a mixed unit of mostly Loyalist American infantry and cavalry.

Tarleton’s “Green Dragoons” were involved in a number of battles but earned their infamy during the Battle of Waxhaws on May 29, 1780, near Lancaster, South Carolina.

When the American commander, Colonel Abraham Buford, refused Tarleton’s demand to surrender the latter ordered a full charge, despite being outnumbered nearly two to one.

Buford’s decision not to deploy his troops in battle lines but instead maintain his marching formation proved disastrous as his men were routed, and what happened next would be the subject of great controversy.

Many Americans threw down their weapons and tried to surrender, and even Buford reportedly raised a white flag, but at that precise moment Tarleton’s horse was shot out from under him.

Enraged that their commander had apparently been killed by troops purporting to surrender, Tarleton’s men swarmed in and slaughtered much of the American force with sabers and bayonets.

Tarleton’s own report claimed 113 Americans killed and another 147 wounded, while his own losses were 5 killed and 12 wounded. The incident was called the Waxhaws Massacre by American forces- “Tarleton’s Quarter,” meaning no mercy, was reportedly used as a rallying cry by colonists for the rest of the war.

The next year Tarleton suffered a crushing defeat at the Battle of Cowpens and later surrendered with Cornwallis at Yorktown and returned to England where he was promoted to general and eventually served in the House of Commons.

His political career was as controversial as his military one- though his Whig party opposed the slave trade, Tarleton became a leader in the pro-slavery movement in Parliament, presumably because of its importance to his constituents in Liverpool but perhaps because of his own family’s shipping interests.

In 1815 he was made a baronet and in 1820 knighted. While he carried on a long affair with poet and actress Mary Robinson, he eventually married Susan Pricilla, the illegitimate daughter of Robert Bertie, the Fourth Duke of Ancaster, and died childless in January 1833.

In 2000, the Mel Gibson movie “The Patriot” featured a ruthless British cavalry officer – Colonel William Tavington – whose character was based on Tarleton, a move that inspired protests from some quarters in England that Tarleton was being unfairly smeared.

Burnham has toured the Northeast for several years appearing at Mount Independence, Saratoga, Bunker Hill and Fort Ticonderoga, and other performances have included interpretations of British General John Burgoyne and Lord Cornwallis, as well as American General Horatio Gates and Thomas Paine.

The Old First Church Barn is located on Monument Circle, near the Bennington Battle Monument in Old Bennington just north of Route 9. The Monument and Gift Shop are open 7 days a week from 9:00 a.m. until 5:00 p.m., mid-April until October 31st.