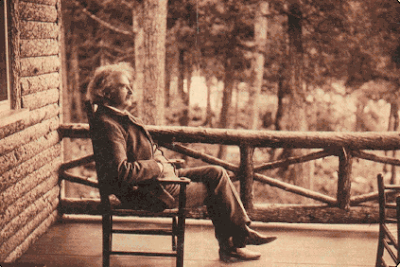 As fans of Mark Twain the world ‘round await the fall release of his unexpurgated autobiography a century after his death, scholars, authors, teachers, and other admirers of Twain will gather on the time-carved shores of Lower Saranac Lake to draw a more intimate portrait of the writer and humorist and explore his indelible contributions to American life and letters.

Doors will open at 9:30 a.m. At 10:00 a.m., Dr. Alexander will explore Twain’s surprising connections to the Adirondacks, focusing on his retreat from the outside world to the Kane Camp on Lower Saranac Lake in 1901 and the little-known essay, “The United States of Lyncherdom”, Twain wrote when the news of lynchings in Missouri reached him there. So incendiary, Twain allowed publication of the essay only after his death.

At 11:00 a.m., Steven Kellogg will read passages from Adventures of Huckleberry Finn and share why he counts it among his favorite books. Dr. Washington will continue the focus on Huck Finn, guiding the audience through critical debates over the work since its publication in 1885 and Twain’s straightforward treatment of slavery and race.

Following their formal presentations, Kellogg, Washington and Alexander will invite the audience to participate with them in an open-ended conversation about Twain and his lasting influence and power to provoke even today, 100 years after his death.

In November, the University of California Press will publish the first of three volumes of Twain’s half-million word autobiography, most of which the author dictated to a stenographer over the course of the four years before he died in 1910. According to New York Times reviewer Larry Rother, “a very different Twain emerges, more pointedly political and willing to play the angry prophet” (NYT 10 Jul 2010).

“Mark Twain in the Adirondacks” will be held at the rustic Guggenheim. Complimentary coffee, tea and pastries will be provided in the morning and ice cream donated by Stewart’s Shops will be served during the afternoon conversation. People are encouraged to pack a lunch.

A $5 donation is requested for Guggenheim program. Optional hour-long boat tours to the privately-owned Kane Camp where Twain stayed will be offered in the afternoon, starting at 2:00 p.m. Sign-up for the tours is on a first come, first serve basis, beginning when the doors open at 9:30 am. Tickets for the boat tours are $20 each, which includes entrance to the talks at Guggenheim Camp.

“Mark Twain in the Adirondacks” is a joint project of Historic Saranac Lake, John Brown Lives!, Paul Smith’s College, Keene Valley Library, and Saranac Lake Free Library. On July 23, Keene Valley Library hosted Huck Finn Out Loud—a twelve-hour marathon reading of the novel. Volunteer readers and listeners from all walks of life hailed from across the North Country and from Paris, France.