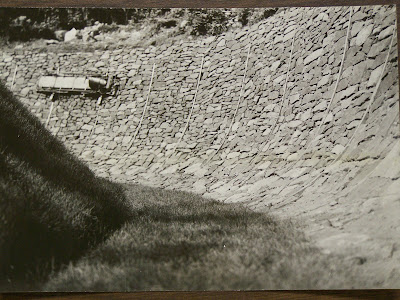 Lake Placid’s 1932 and 1980 Olympic bobsled track will officially become a part of the National Register of Historic Places during a plaque unveiling ceremony on Monday, July 12. The ceremony is scheduled to begin at 3 p.m. on the deck of the Lamy Lodge.

The original one-and-a-half mile long track (photo taken during construction at left) at Mt. Van Hoevenberg was completed in Dec. 1930, in time for the 1932 Olympic Winter Games, and since that time has played a significant role in the sport of bobsled’s history. It was during those games that Olympic two-man racing was introduced as well as the push start.

In 1934, the International Bobsled Federation (FIBT) established a one-mile standard for all tracks. To accommodate the change, the top one-half mile was shut down above the Whiteface curve and the number of curves was reduced from 26 to 16, making the upper portion of the run unusable.

Today, the track no longer hosts international competitions, but it remains in use. Summer bobsled rides are held on the course, where visitors can enjoy half-mile rides, reaching speeds in excess of 50-miles-per-hour, with professional drivers steering their sleds.

Admission to the ceremony is free after 2 p.m. A guided tour with Guy Stephenson, licensed NYS guide, Wilmington Historical Society member, and retired Olympic Sports Complex staff member responsible for the restoration work on the 1932 portion of the track, will also begin at 2 p.m. Tour participants will be bussed to the 1980 start to begin the one-hour walk up the 1932 piece of the track. Light hiking attire is suggested.

Also from 2-4 p.m., in celebration of the national historic registry, half-mile long wheeled bobsled rides on the 1932 and 1980 Olympic track will be available for $55 per person. Bobsled rides have been a continuous part of the track’s operations since it first opened, Christmas 1930.