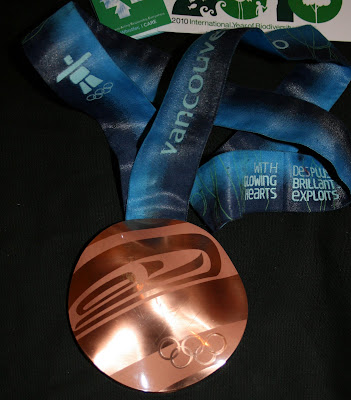 “The medal was turned over for display and for safe keeping between appearances,” noted museum curator Liz Defazio. “It’s so nice for these athletes to have a place where they can share their accomplishments with others… sort of their home away from home.”

Nicknamed the “Warhorse” on the international alpine ski tour, Weibrecht began skiing at the age of five at Whiteface Mountain and began racing with the New York Ski Educational Foundation (NYSEF) program by the time he was 10. He had only been on the World Cup circuit since 2006 and Vancouver was his first Olympic Winter Games.

There are quite a number of artifacts on display in the museum from the 2010 winter games donated by several of the 12 area athletes who competed, as well as coaches and officials. The artifacts include race gear, Opening Ceremony clothing, official U.S. Olympic team clothing, event tickets, programs and pins.

Admission to the museum is $6 for adults and $4 for juniors and seniors. Admission is also included when purchasing an Olympic Sites Passport. The Passport gives visitors access to each of ORDA’s Olympic venues—from Whiteface Mountain to the Olympic Sports Complex and everything in between. Sold for $29 at the ORDA Store and all of our ticket offices, the Passport saves you time, money, and gets you into the venues at a good value. For more information about the Olympic Sites Passport, log on to http://www.whiteface.com/summer/plan/passport.php.