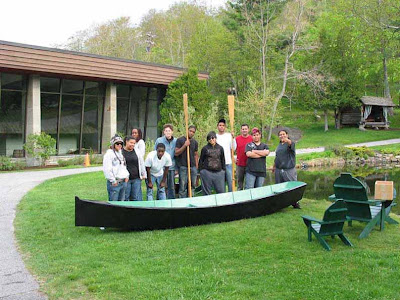 There is a new boat on the small pond at the Adirondack Museum, Blue Mountain Lake, New York. It is a Bisby Scow and will be used to provide a genuine &#8220on the water&#8221 experience for thousands of museum visitors this summer.

The new boat is a reproduction of one in the museum’s extensive collection. Although &#8220Adirondack&#8221 in design and history, this Bisby scow started life far from the North Country. The hand-made boat is the work of young boat builders from the Bronx, participants in Rocking the Boat, a non-profit youth development organization.

On Saturday, May 22, 2010, the boat building crew, accompanied by adult builders and faculty, delivered, christened, and launched the Bisby Scow on the museum pond. This is the second boat created by Rocking the Boat expressly for the Adirondack Museum. The first, a replica of an Adirondack logging bateau, was launched in 2007.

Rocking the Boat is a traditional wooden boat building and environmental education program based in the southwest Bronx, New York City. Through an alternative multi-faceted hands-on approach to education and youth development, Rocking the Boat addresses the need for inner city youth to achieve practical and tangible goals, relevant to both everyday life and future aspirations. The program was founded in 1995.

Young people enrolled in the program have built well more than twenty boats over the time, and Rocking the Boat is recognized as one of the most dynamic after school and summer programs in New York City. For more information, visit www.rockingtheboat.org.

Museum Curator Hallie Bond, who coordinated the project, says that a member of the Bisby Club designed the original Bisby Scow in 1888. The craft was intended for all-purpose every day use and few exist today. The Bisby Scow in the collection of the Adirondack Museum &#8211 a rare survivor &#8212- dates from the 1920s: the name of the builder is unknown.

The Adirondack Museum has the second largest collection of inland wooden watercraft in the United States. Many extraordinary examples are on display in the popular exhibit &#8220Boats and Boating in the Adirondacks, 1850 &#8211 1950.&#8221