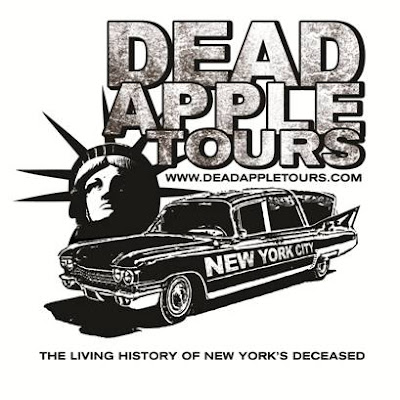 A new tour company is taking guests on a unusual look at New York City. The brainchild of Drew Raphael, a native New Yorker, Dead Apple Tours was inspired after watching fans gather outside the home of Heath Ledger immediately after the news of his death. Raphael figured with so many interesting locations in New York of famous and infamous accidental deaths, murders and suicides—why not collect a group of these experiences into one tour to get a fuller picture of the Big Apple? Why not present the “living history of New York’s deceased?” Dead Apple Tours gives passengers on its downtown tours a unique sightseeing experience in a rare, classic hearse that has been customized for a comfortable ride.

Highlights of the Dead Apple Tours include:

* The Soho spot where Heath Ledger spent his final hours.
* The secret of the “Hangman’s Elm” and “Dead Man’s Curve.”
* The Little Italy locale where mobster “Crazy Joe” Gallo ate his last bowl of pasta
* The spot where Sid Vicious allegedly killed girlfriend Nancy Spungen as well as the location where he eventually overdosed himself, and more.

The star of Dead Apple Tours is “Desdemona”- one of only 478 Cadillac Superior Crown Royale Hearses made in 1960 and believed to be one of only a handful left in existence today. This deluxe vehicle has been painstakingly restored and customized to provide a comfortable, modern ride in plush seats with the comfort of air conditioning, WiFi and video screens to help complete the story-telling adventure.

The downtown tour runs approximately two hours, starting at the Empire State Building and ending at the South Street Seaport. Winding through the streets of lower Manhattan participants learn “New York City Death Fun Facts” while Dead Apple Tours takes them to the exact locations the most famous deaths occurred.