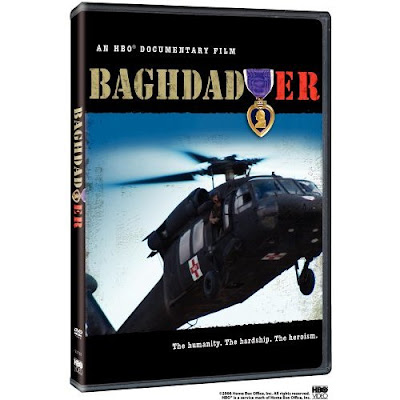 On July 1, the New York State Museum will present the Emmy award-winning HBO documentary “Baghdad ER,” followed by a reunion and discussion between the producer and the first wounded soldier to appear in the film.

Following the 6:30 p.m. film presentation, producer/director Matthew O’Neill will be reunited with Staff Sgt. Craig Macy from Buffalo, a New York National Guard Soldier who was wounded in Iraq in 2005. Macy will speak about his experiences as a wounded veteran, appearing in the documentary and his continuing membership in the National Guard.

The program is being held in conjunction with the new Museum exhibition “Citizen Soldier: New York’s National Guard in the American Century,” open in Exhibition Hall through March 2011.

When it was released in 2006, “Baghdad ER” was the most honored documentary of the year, winning four Emmy Awards for its “unflinching” look at the cost of war. It also won a Peabody Award, the Overseas Press Club Award and the Alfred I. duPont Columbia Award. The groundbreaking documentary chronicles the day-to-day lives of doctors, nurses, medics, soldiers and chaplains in the Army’s premier medical facility in the combat zone. O’Neill and producer Jon Alpert were given unprecedented access to the Army’s 86th Combat Support Hospital during a two-month period in 2005.

The film captures the experiences of the military medical professionals as they work to save lives from their trauma center in the middle of war-ravaged Iraq. The film is not suitable for children. It includes graphic scenes that are at times disturbing and when the film first came out, the Army was concerned about the emotional impact it might have on troops and military families. Instead, the film became almost required viewing for all members of the military medical community and went on to receive critical acclaim from both inside and outside the U.S. military.

Macy was serving with the National Guard’s 1st Battalion 69th Infantry in Iraq in 2005 when he was struck by a sniper as he was handing out candy to Iraqi children. Thanks to his comrades who rushed to his aid, and the expert medical care he received at the trauma center, Macy survived his ordeal, recovered and returned to duty with the National Guard. He volunteered for a deployment to Afghanistan in 2008 with nearly 1700 New York National Guard troops. While still a member of the National Guard, Macy is now a police officer with the City of Buffalo. He recently became a new father and has named his son after one of the soldiers who pulled him to safety in 2005.

This program is the first in a series of special programs that the State Museum is hosting in conjunction with the “Citizen Soldier” exhibition. The exhibition recounts the history of the New York National Guard and those who carried out its mission through wars and battles, natural disasters and national emergencies. The National Guard is based on a tradition dating back to colonial times in a state that has always been guided by the principle that its defense lies in the hands of its citizenry. Citizen soldiers are everyday people who put their lives on hold to defend, aid and protect their communities and their country.