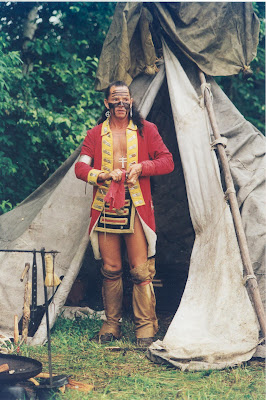 On the anniversary of American independence, a historical re-enactor will visit one of the historic sites from that period and detail its connections to the Native Americans who also inhabited the area.

Wes “Red Hawk” Dikeman of Ticonderoga, New York, will be coming to the Mount Independence State Historic Site on Saturday, July 3, from 1:00 to 3:00 p.m. to share his extensive knowledge about the Abenaki connections to the area in the American Revolution and as first inhabitants.

“Dikeman is a riveting storyteller who has been studying and interpreting this history for many years,” said Elsa Gilbertson, Regional Historic Site Administrator with the Vermont Division for Historic Preservation. “He often takes part as a re-enactor in the annual Revolutionary War living history weekends at the Hubbardton Battlefield and Mount Independence.”

She said the program will be an informal afternoon with Red Hawk, and a special discussion at 2:00 p.m.

&#8220He will show some of his artifacts, as well as Revolutionary War attire and gear,” Gilbertson said. “Native Americans have had a very long history at Mount Independence, first digging chert quarries for making stone tools, and then participating in the American Revolution.”

Mount Independence, a National Historic Landmark, was built in 1776-77 by American troops as a defense against British attack from Canada, and named after the Declaration of Independence.

On the night of July 5 and 6, 1777, the American Army under General Arthur St. Clair withdrew from Mount Independence and nearby Fort Ticonderoga after British General John Burgoyne sailed down Lake Champlain in an effort to cut New England off from the rest of the United States.

Since a British force more than twice his size had occupied higher ground from which they could bombard his positions with impunity, St. Clair abandoned the fortifications without a fight.

Two days later at the Battle of Hubbardton, soldiers from Vermont, Massachusetts, and New Hampshire fought in a decisive rear guard action to halt Burgoyne’s army.

The fact that his decisions preserved the army and ultimately led to the American victory in October at the Battle of Saratoga didn’t stop an outraged Congress from officially censuring St. Clair for the loss of the forts. He argued that his conduct had been honorable, demanded review by a court martial, and was ultimately exonerated

Admission is $5.00 for adults and free for children under 15, and includes a visit to the museum and access to all the trails.

The site is located nearly the end of Mount Independence Road, six miles west of the intersections of Vermont Routes 22A and 73 near Orwell village. Regular hours are 9:30 a.m. to 5:00 p.m. daily through October 12. Call 802-948-2000 for more information.