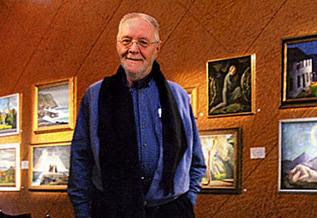 SUNY Plattsburgh has announced that the recipient of the college’s 2010 Distinguished Service Award is Edward R. Brohel. After 30 years and 10,000 works of art, Brohel hung his last painting as Plattsburgh State Art Museum director in the summer of 2008.

When Brohel arrived on campus in 1978, the college was a different place. In the words of E. Thomas Moran, SUNY distinguished service professor and director of the Institute for Ethics in Public Life, &#8220The galleries were undeveloped and underutilized. Much of the architecture seemed cold and austere.&#8221

During his tenure on campus, Brohel went a long way toward changing all of that. Under his leadership, the college’s art collection grew from less than 500 pieces to 10,000 pieces and came to include the Meisel Collection, the Student Association Collection, the Nina Winkel Collection, and the Slatkin Study Room and Collection. In addition, Brohel helped to oversee the installation of the Rockwell Kent collection, a gift Sally Kent Gorton bestowed on the college because of the Kents’ friendship with then-President George Angell. This collection represents the largest gathering of Kent’s work in the world.

In addition, new galleries took shape, including the Hans and Vera Hirsch Gallery, the Louise Norton Room, the Winkel Sculpture Court and the Rockwell Kent Gallery.

But Brohel’s work was not limited to galleries. He changed the face of the campus by erecting the Museum Without Walls – a network of art, placed in public spaces and offices throughout campus, based on a concept by Andre Malraux. And, with the help of co-curator Don Osborn, he put in place the college’s sculpture park – a permanent collection of monumental pieces.

&#8220In addition to beautifying the campus in ways that cannot be measured, Ed’s efforts have helped to raise more than $1 million in charitable gifts to the college’s museum, including the George and Nina Winkel, Rockwell Kent, Regina Slatkin, Don Osborn and Hasegawa Art Collections endowments,&#8221 said SUNY Plattsburgh College Council Chair Arnold Amell, &#8220His service has, indeed, meant a lot to this campus.&#8221

As Moran said at a retirement reception honoring Brohel two years ago, &#8220In the end, he created everywhere on campus little grottos of beauty and contemplation. In doing so, he gave our college genuine distinction and amplified the ideal and the essence of what a campus should be.&#8221

Brohel and his wife, Bette G., reside in Plattsburgh.

The Distinguished Service Award is presented by the College Council to honor individuals who have made a lasting contribution to the college, community, state, nation and/or to the international community. The award will be given to Brohel during the college’s commencement ceremonies at 10 a.m. and 1 p.m. Saturday, May 15.