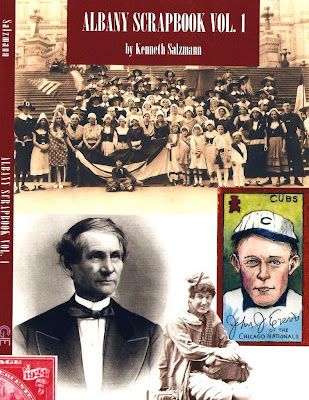 Over the past few days I’ve been enjoying a lighthearted and wide-ranging romp through Albany history while reading Kenneth Salzmann’s Albany Scrapbook. The book is a montage of sorts of life in Albany, often neatly tying the city’s past with its present. Salzmann wrote the essays collected in this volume while working as a freelancer for the now-defunct weekly magazine Albany, New York. The author debunks a few of legends, such as the story that Fidel Castro was once scouted by the Albany Senators, and delves into four centuries worth of the people and places. Salzmann’s fascination with Albany is evident in his introduction, where he writes: