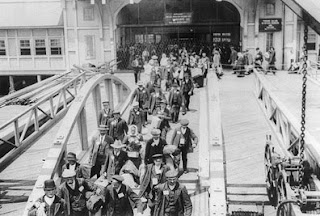 On Tuesday, April 20 from 4:30-6:30 pm, the New-York Historical Society will participate in the citywide Immigrant Heritage Week observance with a panel discussion about the upcoming exhibition, Nueva York. During the first half of the program, curators will discuss highlights of the exhibition, which explores how Spanish-speaking people have affected virtually every aspect of the City’s development from commerce, manufacturing and transportation to communications, entertainment and the arts from as early as the 17th century through today.

The second half (45 minutes) of the program will be a workshop for teachers and others interested in exploring how this dynamic history can be brought to life for learners of all ages through a rich collection of documents, manuscripts, photographs, and multimedia resources, including film and music.

All attendees must enter the New-York Historical Society through the loading dock at 5 W 76th Street. RSVPs are welcome to [email protected] Admission is free.

This event will serve as a preview to Nueva York, an exhibition exploring New York’s long connection with Spain and Latin America. Organized by the New-York Historical Society and El Museo del Barrio, Nueva York will be on view from September 17, 2010, through January 9, 2011.

This year, Immigrant Heritage Week is celebrated from April 15 to April 21. Throughout the week, a collection of family friendly events, film screenings, art exhibits and walking tours will promote and reflect the diversity of the immigrant communities in our City.