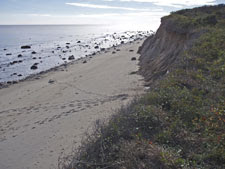 The New York State Office of Parks, Recreation and Historic Preservation has completed a Draft Master Plan and Draft Environmental Impact Statement (DEIS) for Jamesport State Park in Suffolk County. A public hearing on the plan will be held Tuesday, May 18th at 6:30pm at the Naugles Barn located at the Hallockville Museum Farm, 6038 Sound Avenue, Riverhead, NY 11901.

The master plan outlines OPRHP’s vision for potential capital improvements, operational enhancements and natural and cultural resource stewardship within Jamesport State Park for the next ten to fifteen years. Availability of funding, the need to invest in rehabilitation of existing park infrastructure, and other pressing needs in the entire state parks system will influence the timing and implementation of the improvements.

Copies of the Draft Plan/DEIS are available for review at the Wildwood State Park office, the offices of the agency contacts listed below and at the Riverhead Public Library, 330 Court Street, Riverhead, NY 11901. An online version is available at: http://www.nysparks.com/news/publicdocuments/.

People unable to attend the meeting may submit written comments by Friday, June 11 to one of the following: