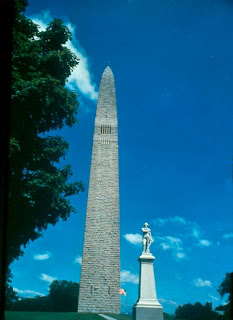 Vermont’s tallest building is opening for business again, as the Bennington Battle Monument begins its season on Saturday, April 17. Built to commemorate the August 16th, 1777 Battle of Bennington – which actually took place in nearby Walloomsac, New York – this Vermont State Historic Site opened to the public in 1891, some four years after construction began in 1887, at a cost of $112,000.

The monument, a 306-foot stone obelisk, was constructed on the site of a Continental military storehouse that was the objective of the British attack. With his army short of ammunition, food and arms, British General John Burgoyne decided to attack the town of Bennington and capture the storehouse and its supplies, sending about 800 men into battle against what he thought was a militia force about half that size.

Instead, they ran into about 1,500 New Hampshire militiamen under General John Stark, who attacked after reportedly telling his troops, “There are the Redcoats- they will be ours or tonight Molly Stark sleeps a widow.”

After defeating the main British force, which also included Loyalist troops, Native Americans, and Hessian mercenaries, Stark found himself under attack by a force of roughly 500 British reinforcements sent to aid the original raiders.

But he rallied his men, and the timely arrival of Colonel Seth Warner and his 500 Green Mountain Boys turned the tide as the combined American force counterattacked and drove the British from the field.

Events for the season includes the Climb of Your Life fundraising stair-climbing race sponsored by the American Lung Association on June 5th- the annual reading of the Declaration of Independence on the Fourth of July- and Bennington Battle Day on August 14 and 15, which will feature an encampment, cannons, ceremonies and re-enactors on site.

The monument and gift shop, located in Old Bennington, will be open from 9:00 a.m. until 5:00 p.m. daily through October 31 and are fully accessible. Admission to the Monument is $2.00 for adults, $1.00 for children (ages 6 thru 14), and children 5 and under are free as are scheduled school groups. Tickets can be purchased in the gift shop, where a fine selection of quality merchandise relating to the battle and the monument, along with gifts, maple products, books and more is offered.

Further information is available online at www.historicvermont.org or by calling (802) 447-0550.